Olaf Diegel is a man we’ve been writing about a lot lately. The man aims to combine 3D printing technology and musical instruments. More specifically, he printed guitars, saxophones and many more instruments. We just received the news that a live band has been playing on 3D printed instruments, made by Diegel. The enthousiast pulled media tricks like this one before and Tedx recently taught me nothing beats the real thing, so my musical expectations weren’t that high. Listening to the video, however, was a proper reason to change my mind. 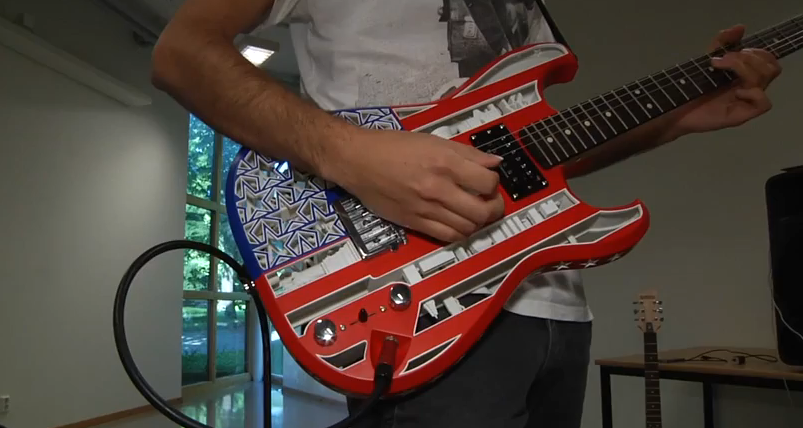 To cut a long story short: this sounds perfect. In the video you can hear a classic rocksound  by a band consisting of a drummer, a bass guitar player, a guitar player and a keyboard player. These are all students from Lund University’s Malmö Academy of Music in Sweden. Despite their plastic instrument, they managed to create a classic psychedelic, and funky eighties sound.

One thing I found striking in this context was something Diegel said in the middle of the video. He said musicians are very creative, but also very conservative, which made their reactions an interesting thing. ” They first approach what is essentially a plastic guitar with suspicion,” he said. “Then, when they have a play with it, they’re amazed that it sounds and plays like a high quality electric guitar.”

There, I catch myself thinking I am too suspicious about plastic instruments – just like any musician or music lover. Maybe we, all music lovers out there, should all be a little less suspicious – while talking about 3D printed electric instruments. Another accurate point Diegel makes is that 3D printing technology enables him to create highly detailed figurines on guitars, such as bees or the statue of liberty. The world currently thinks plastic guitars miss the ‘retro feel’, but hey: maybe Diegel’s guitars will one day become vintage items – the only thing that is constant is change, isn’t it? Well, watch the video and form your own opinion about this sound: