Soon two new MakerBot stores will open doors. The 3D printer manufacturer is about to open two new retail stores this holiday season. One store will be in Boston, in the busy downtown shopping district at 144 Newbury Street. The second store will be located in Greenwich, Conn. It will also be located in a busy shopping area at 72 Greenwich Avenue. 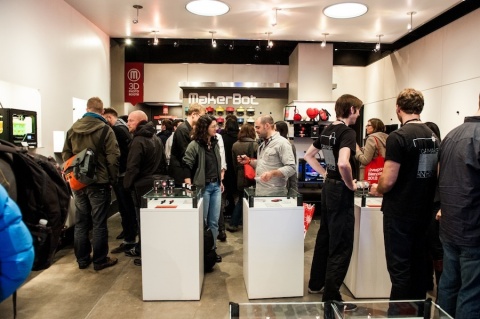 MakerBot  already has a store in New York City, which showcases innovative 3D printers and a scanner as well as the MakerBot 3D Photo Boot, workshops and unique 3D printed gifts. The same is to be expected of the new stores in Boston and Greenwich, Conn. “Boston and Greenwich are both terrific, tech-savvy communities, so it seemed natural to expand the MakerBot Store presence in these two areas, ” says Jenny Lawton, president of MakerBot.

MakerBot is a 3D printing company and it’s  based in Brooklyn. The company has produced the award-winning MakerBot® Replicator® 2 Desktop 3D Printer, which has been winning a lot of competitions. It is one of Time magazine’s Best Inventions of 2012, it’s Popular Mechanics’ Editor’s Choice Award for Overall Winner – Best 3D Printer, and it received a TechCrunch Crunchies award for Best Hardware Startup. Also it has a Popular Mechanics’ Product of the Year designation, a Gold Edison Award for Best Design, and it was a Fast Company Innovation by Design Award Winner 2012. The MakerBot® Digitizer™ Desktop 3D Scanner was released this fall. Recently is was named a Popular Mechanics’ Breakthrough awardee.