The University of Toronto has partnered up with a hospital from Uganda and an NGO to 3D print prosthetics in order to speed up the process of helping Ugandan people who’ve lost a limb. 3D printing makes it easier to create high quality prosthetic limbs. 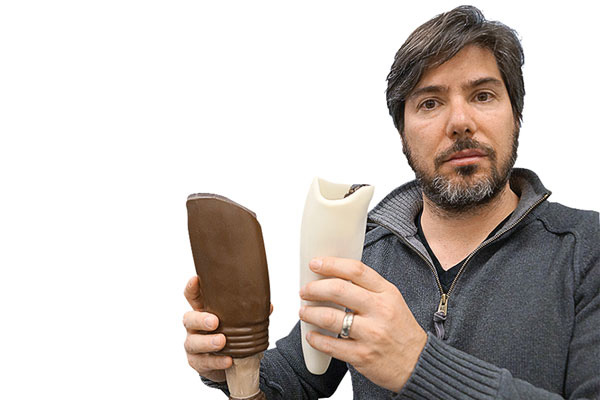 Professor Matt with a traditional prosthesis (left) and a 3D printed one (right). Credits: Ginger Coons.

With the methods of today, it can take several days to weeks until a prosthesis is available for the patient. However, many patients don’t have the financial resources to wait in a hospital for a longer time. In addition, today a specialized technician is still needed to create the prosthetics, while there aren’t enough technicians in developing countries like Uganda. Because 3D printers have become faster and cheaper to produce, using this technique now seems like the perfect next step for the researchers.

It works as follows: after a scan of the patient is made in Uganda, this 3D scan can be sent to a different part of the world in only a few seconds. A technician can digitally design a prosthesis over there and send the file back to Africa in order to have a 3D printer print out the prosthetic limb. This prosthesis can then be created in less than a day.

“The major issue with prosthetics in the developing world is not access to the materials of prosthetics; it is access to the expert knowledge required to form and create them,” says Matt Ratto, who is the director of the University of Toronto’s Critical Making Lab. “We’re lacking prosthetic technicians, not prosthetics themselves.”

The researchers hope they will soon be able to use this project in other countries as well. In Sudan a similar project is currently running. The company Not Impossible is producing 3D printed prosthetic arms for Sudan war victims and that project is called Project Daniel. Maybe some material for a collaboration?