Good news for the Sagrada Família team: researchers at the University of Southern California are working a 3D printing method that will be able to build a 2,500-square-foot house in only 20 hours. The impacts of this machine will be big, because it has the ability to solve to world shelter problem as well as it could rapidly decrease the amount of injuries in the relatively dangerous working field of construction. 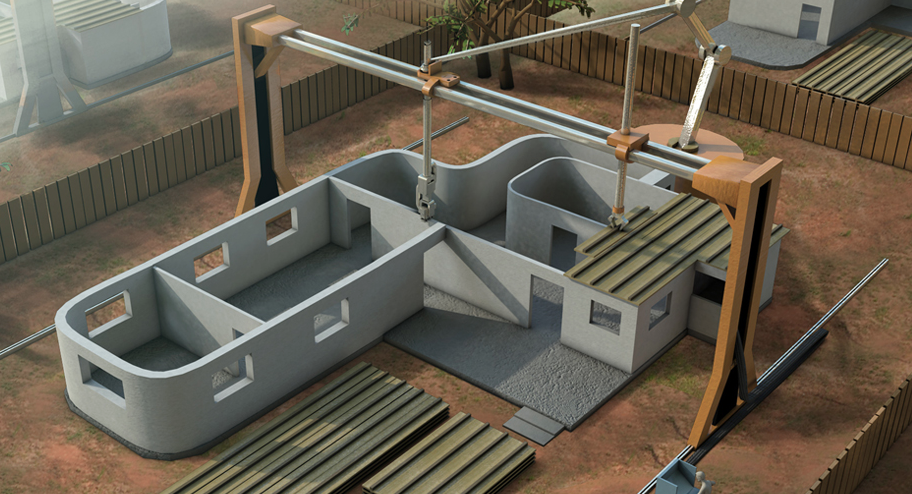 The team calls this method Contour Crafting. It’s a robotic extruding method and it takes its orders from CAD software. The software stores and executes the architectural designs, which can be customized on a construction site. The 3D printer will build the wall layer by layer and they will be hollow to save on materials and make them lighter. However, team leader Behrokh Khoshevis has pointed out during a presentation earlier this year that the walls will be stronger than traditional counterparts. Another striking thing is that the buildings don’t necessarily need to be linear, because the printers can print out curves. Because Contour Crafting will be able to print a house in only 20 hours, it could become much easier to provide shelter for homeless people all over the world.

Contour Crafting is set to enter the commercial market in about two years, and this will also have big implications for the field of construction. If a 3D printer could do the job, then what do you need construction workers for? Khoshnevis defends his innovation by saying today’s construction work is “wasteful and emission causing and corruption prone. And, the cost is always over budget.” If you think about the huge amount of injuries every year, you would probably agree with him on that. Every year as many as 400,000 construction workers become injured and 6,000 to 10,000 construction workers get killed in the U.S. alone. However, by replacing many of them by 3D printers, there will be a lot of layoffs. There are two sides to every coin.

Khoshnevis thinks this is an old-fashioned view. He compares today’s situation with the early 1900s, when a huge amount of Americas population included farmers, who were afraid of agricultural technology. They feared it could put them out of work, which made sense in a way that today only 1,5 percent of all Americans are farmers. On the other hand, the other farmers have found different ways to make themselves useful in the field of agriculture or they’ve just found a different job.

And that’s whats it’s all about, thinks Khoshnevis. He claims that Contour Crafting will be creating new jobs and that it will provide older workers as well as women a chance to work in new areas of construction. “There will always be better economies resulted from the advancement and utilization of technologies that just make sense,” he has said.