The volumetric 3D printing space is quickly heating up. On seemingly the same day that xolo announced the availability of the world’s first volumetric printer called xube to research agencies, the US Patent Office granted Southern Methodist University in Dallas, Texas the patent for “System and method for a three-dimensional optical switch display (OSD) device,” which is a fancy way of saying volumetric 3D printing. Topshelf Enterprises (T3DP) will be licensed to commercialize the technology.

What is Volumetric 3D Printing

Volumetric 3D printing is a very new method of AM that has been in the research stages for about four years. It’s a type of vat resin polymerization, but instead of using a projector or lasers, it uses both (or two lasers). I’ll do my best to describe the process with words but I recommend watching the visualization created by xolo to better understand their technology that they call xolography.

The resin has dual color photoinitiators so it cures only after it’s been activated by a certain wavelength of UV light and then exposed to a different wavelength of visible light. A 405nm diode laser is directed through (collimated) special lenses to transform the beam into a thin sheet of light, and that sheet of laser light is shone through the vat of resin on the X axis, activating the molecules of photoinitiators within the sheet. Simultaneously, a visible light projector oriented on the Y axis shines synchronized cross sections of the digital model onto the sheet of laser light, and where the projected light and laser sheet intersect is where the resin cures. On the xube, the vat is moved along the Y axis to achieve layered curing of 3D shapes. In other technologies, the vat is rotated to achieve the same result. Hopefully, that makes some kind of sense.

What separates xolography from other forms of volumetric printing is the use of a visible light projector to cure the resin after it’s been selectively activated by the sheet of laser light. Other technologies rely on two lasers with different wavelengths to intersect and achieve the same result, but it’s much less likely that two photons will hit the same molecule simultaneously so that method is quite slow. Xolography is up to 100,000 times faster and it has an amazing resolution of 25 microns. 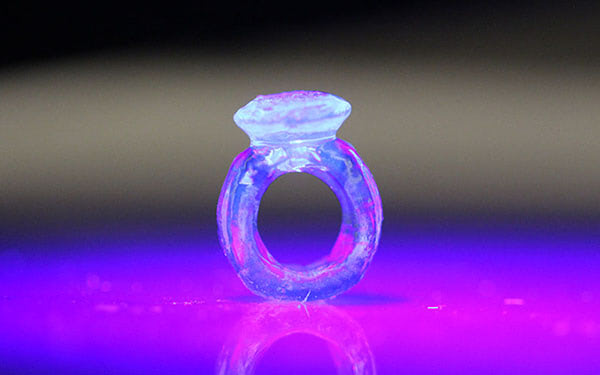 Why Use Volumetric Printing?

The primary advantage to volumetric printing over other forms of vat polymerization is speed, primarily because the time-consuming peeling step is bypassed. Objects can be printed in seconds or minutes rather than hours. “I like to imagine that it’s like the replicator from Star Trek. As you see the light sheet moving, you can see something created from nothing,” said Nature study co-author Martin Regehly, an experimental physicist at the Brandenburg University of Applied Science in Germany.

But there are other perks as well. Curing objects suspended in the middle of resin means the resin supports the object at all points, making support structures completely unnecessary. That enables the printing of floating objects within objects as well as complex chambers and channels. There are also fewer consumables since there’s no non-stick peeling surface that needs to be regularly replaced.

While all of these technologies share a common method of curing objects suspended in resin using two sources of light, the differences are in the details. The fact that xolo uses visible light is likely enough to protect them from IP infringement claims from companies who are using two lasers. There are also noteworthy differences in the “two-photon polymerization” and “dual color photoinitiators” methods from a chemistry standpoint. T3DP’s technology relies on a resin comprising an “optical molecular switch molecule, wherein the optical molecular switch molecule has a non-fluorescent state and a fluorescent state, wherein at one wavelength of optical excitation the molecule has a first state, and at a second state the optical molecular switch molecule fluoresces at a second wavelength of excitation.” Meanwhile,  Siemens Energy filed a patent for “Systems And Methods Of Volumetric 3d Printing” in 2018 that describes a very similar process.  It’s possible that the companies will go after each other in court, but it’s just as likely that they’ll be developed and sold concurrently due to the differences between them creating different ideal applications for each type of printing. It’s important to note that only xolo has a product that’s currently available, though just to universities are other research organizations.