Home / News / Will Our Future Food Be 3D Printed?

Will all of our future meals be made using a 3D printer? Well, probably not all of them, but in some fields the 3D printer will definitely add something to the game. For instance in the field of space, where astronauts are unable to take a lot of food with them. Instead of becoming tired of so-called ‘space food’, they could use a 3D printer in order to fix the job.

Image: the NASA-3D printer working on a pizza. By: KXAN.

This idea is not just a figment of our imagination, as NASA is currently investing as much as 125,000 dollars in a 3D printing food project. A 3D printer in space could be a perfect solution to all dull, highly unpopular space meals. The company Systems & Materials Research has developed a prototype of a food 3D printer. The company presented this printer during the SXSW Eco event back in August, and website Popular Science reported the following about this innovative technique:

“The printer is still in its earliest stages, so the creators haven’t quite perfected the process. Instead of making a classic slice, they’re showing off the proper levels of pizza viscosity with similar ingredients: ketchup for sauce, cream cheese for a fine ricotta. The idea’s more or less the same, though: the printer lays down a layer of dough from a stock of simple, non-perishable ingredients, then layers the sauce (ketchup) and cheese (cream cheese) on top. A heated surface bakes the pizza.”

This video by KXAN shows the NASA 3D printer whilst making a pizza. As you can see, the machine works on a very detailed level in order to create a four-square pizza.

Despite of the fact it could be a revolution in the world of space food, one has to admit the whole process doesn’t yet look very tasteful. If you’re searching for some 3D printers that can produce something more delicious, you will soon end up in the field of 3D printing chocolate. More and more companies become active in this field, such as UK-based Choc Edge. This start-up produced The Choc Creater – and probably earned a lot of money with their printers, because their models have been exported as far as Brazil. In the video below you can see exactly how The Choc Creator is doing its job:

Another striking company in this sector is Piq Chocolates, a company that offers a 3D printing chocolate service to its customers. With their techniques customers can make their “wildest chocolate fantasies” come to life. Given the fact that  they’ve created lots of 3D printed chocolate album covers, the wildest fantasies of the owners are probably rock-‘n-roll-involved. In other words, these will probably be the tastiest album covers you’ve ever seen: 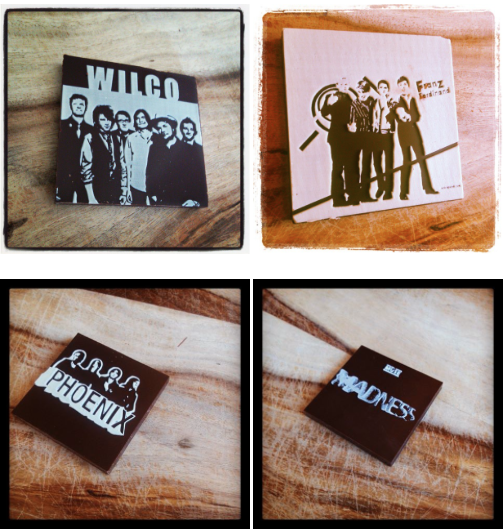 Nevertheless, these are all funny techniques which are great in their own fields, but they will probably not decorate most future kitchens. Barcelona-based company Natural Machines has a higher chance of breaking through in your household. This company works on a 3D printer that will be able to produce anything that’s made of dough, paste or stiff liquid, such as all pastas and breads. This machine will cost about 1000 euros and it’s the companies purpose to create a 3D printer that will make highly delicious food. The idea behind it is that you can print out parts of your meals while you go shopping or while you’re at work. We end with a video by BBC about this innovating company: