He did it before and he will do it again: Olaf Diegel. The engineer from New Zealand has already 3D printed an entire band, and well: what’s a rock-‘n-roll band without a saxophonist? Avi Reichental, CEO from 3D Systems therefore challenged him to 3D print a saxophone and in a new video he shows the first version of his instrument and plays a little bit on it. 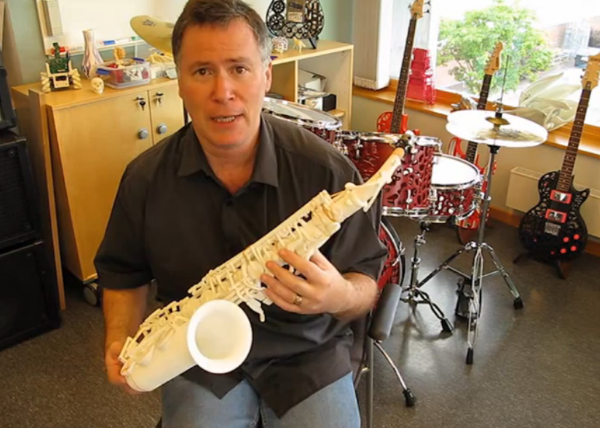 Last year, Diegel managed to 3D print instruments for an entire band and let a band play on them. It was during Euromold 2013 and 3D Systems collaborated with him on the project. Reichental thought about adding a saxophone to the orchestra and Diegel took the challenge.

The result is a saxophone that sounds a lot like the real thing. However, Diegel would still like to perfect his instrument and create a next version. He stated:

“Surprisingly to me, the sax sounds very much like a sax, only maybe a touch quieter. I have a traditional sax that I used to copy the various key spacings and they both sound pretty similar. There are injection molded plastic saxophones around on the market, so I guess a plastic sax is not unheard of. I suppose it’s the same progression as clarinets, which went from wood to bakelite (and some in metal) to plastic. Undoubtedly, there is a difference in sound between a plastic and a metal instrument, but it’s hard to say that one sounds worse, or better, than the other. My suspicion is that it has a lot more to do with the player than the instrument.”

Are you curious about the sound of his saxophone? Then watch the video he made:

Last week, Diegel put a video online, in which he explains very accurately how to 3D print a real electric guitar. He explains how the manufacturing process of 3D printing takes place and which programs could be used to design one’s own guitar. In addition, he also says the technology won’t replace traditional manufacturing technologies, but could be seen as a complementary technology. Watch it below: