Home / 3D Printers / Ender-3 Neo, Ender-3 V2 Neo and Ender-3 Max Neo, Which Is The Best Ender For You?
Join our newsletter

Officially launched in 2018, the Ender-3 series has raised the bar for budget 3D printers and become the choice of many, from professionals to beginners. The Ender-3 Neo series launched in early August and aims to provide 3D printing enthusiasts with significant improvement in user experience. This official purchase guide from Creality will navigate you through the nuances in specs of the Neo series and lead you to the one that suits you the best.

As the suffix “Neo” suggests, the Ender-3 Neo series is the next iteration of the original Ender-3, Ender-3 Pro, Ender-3 V2 and Ender-3 Max. Like their predecessors, the Neo printers will carry on the simple design, open source compatibility, powerful performance and affordable price.

There is a long-held myth about budget 3D printers that they usually sacrifice performance to achieve low-cost, which is certainly not true for the Neo printers. Equipped with an upgraded full-metal Bowden extruder and corrugated heat sinks for quick heat dissipation, the Ender-3 Neo series can achieve a print speed of up to 120mm/s. The CR-Touch automatic bed leveling system is introduced to all three Neo printers, enabling a worry-free bed leveling experience. The resume print function of the Neo series will guarantee a successful print without wasted time & filament when you experience a power outage during a print.

If you are looking for an affordable 3D printer with above-par performance, the Ender-3 V2 Neo may be an excellent option. Equipped with a PC spring steel magnetic build plate, it offers good adhesion and you can easily remove the print with a slight bend. The unique sliced model preview function embedded in the UI system enables you to observe the exact shape of the model you are about to print. 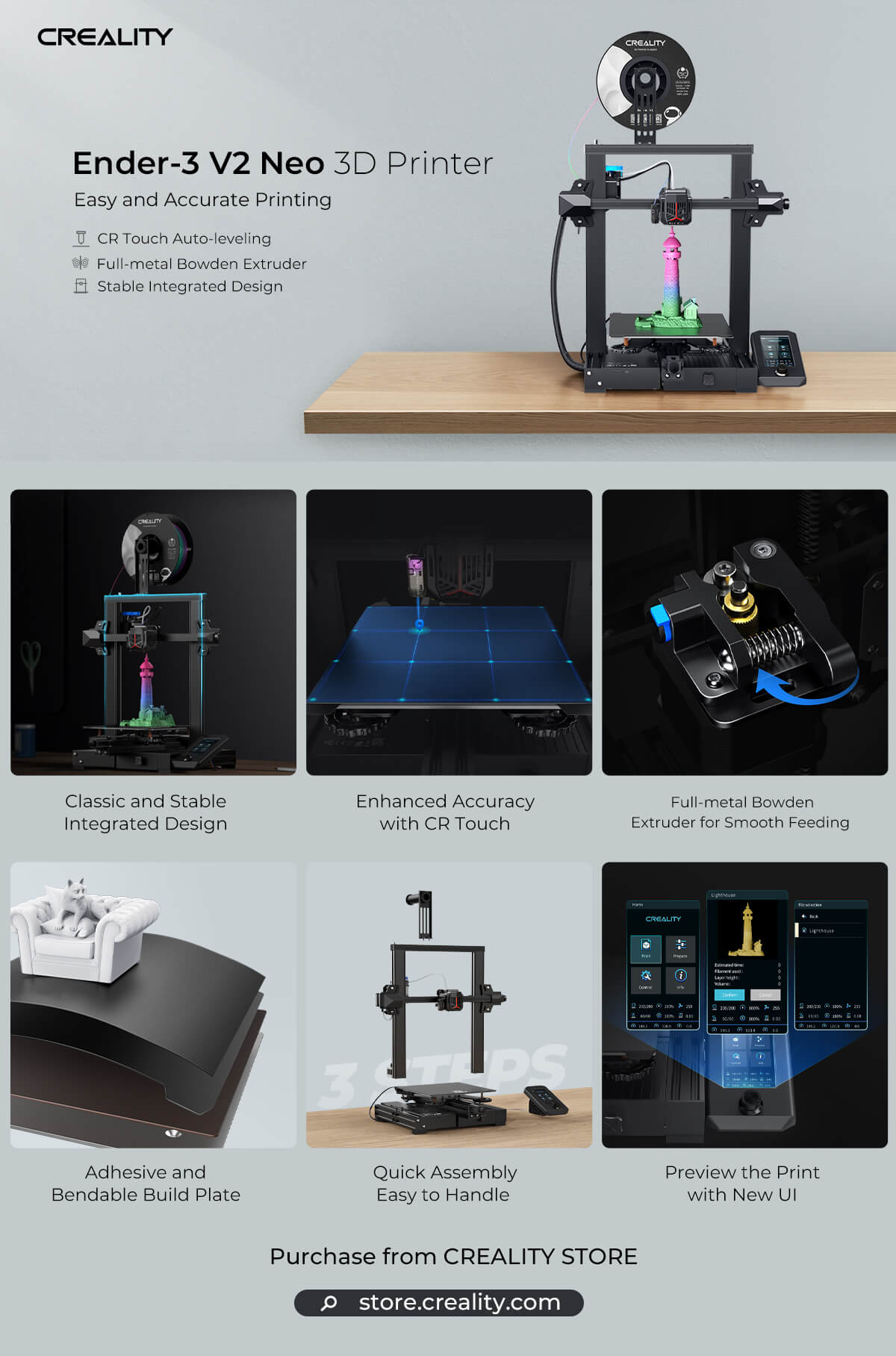 It is also beginner friendly. With some parts pre-assembled, the assembly process can be completed in only three steps. After installing the spool rack, the gantry, and the screen, you are ready to print.

With all the above useful features, the Ender-3 V2 Neo has a price point of $299, $20 more than the original Ender-3 V2 which is nearly half the price of a CR-Touch Auto Leveling Sensor Kit. If you are looking for a high-performance FDM printer under $300, this could be the one.

For large format printer lovers, the most-anticipated Ender-3 Max Neo may be a go-to option. The 300 x 300 x 320 mm build volume gives you the convenience of printing larger models or more parts in one run. Complete with dual Z-axis and motors, the Ender-3 Max Neo provides high stability and precision in 3D printing. It supports filament including PLA, ABS and PETG like the other two Neos. 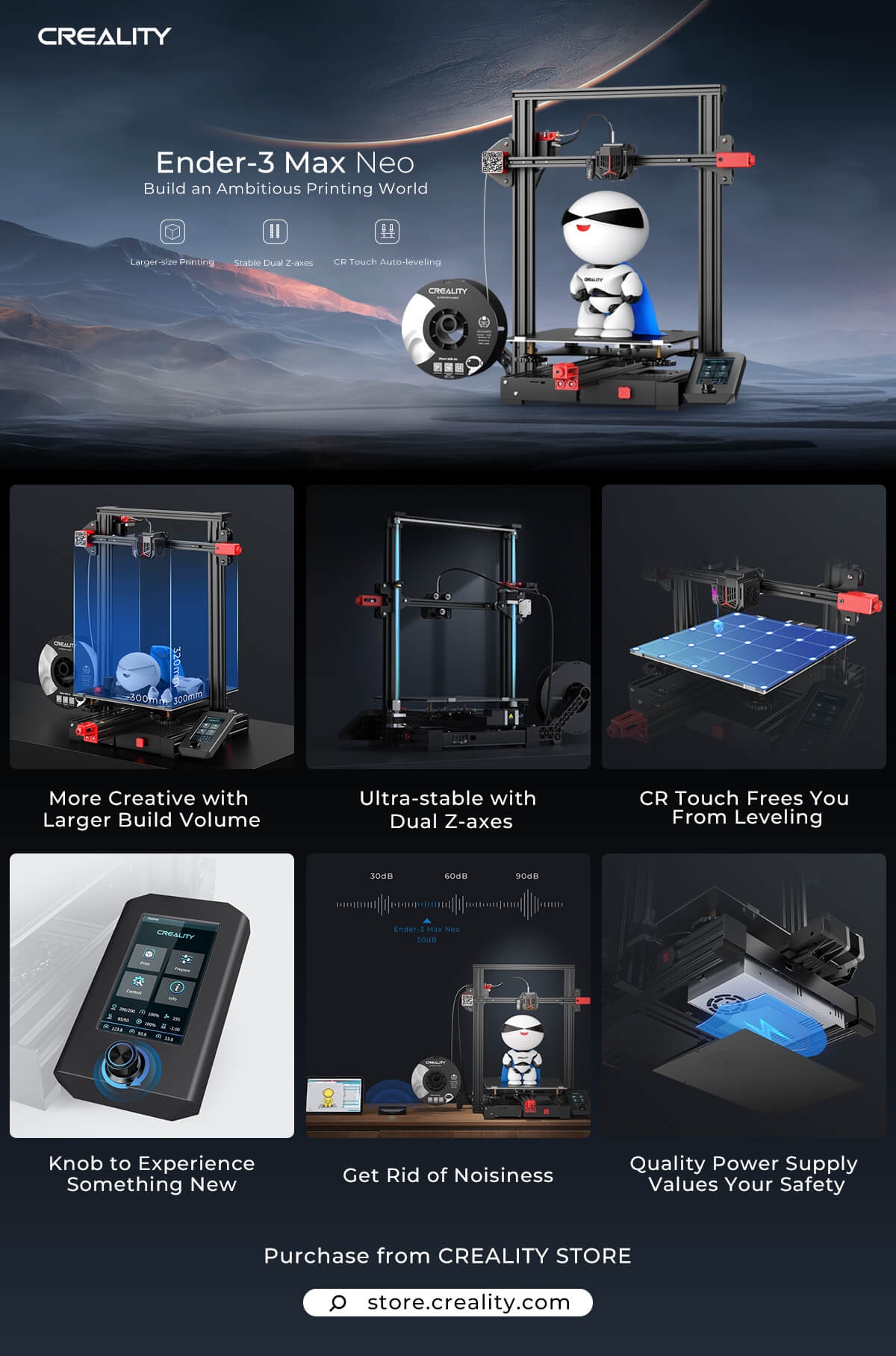 With the large build volume, a filament sensor is installed to detect the filament status, enhancing your success rate. It also integrates a 350W high-quality built-in power supply making the printer more secure and reliable – and it only costs $399. If purchasing at the Creality Official Store, you can get a $30 discount.

Only need a basic version of the Neo series? The Ender-3 Neo is the right Ender for you. It has a carborundum glass build plate like the Ender-3 Max Neo, which is easy to clean. It has all the essential features a Neo printer should have, and is a premium choice for DIY enthusiasts. It is also worth noting that it is only at the price of $219. If you are hesitant to buy your first 3D printer, this one may be right for you to try out at a minimum cost. 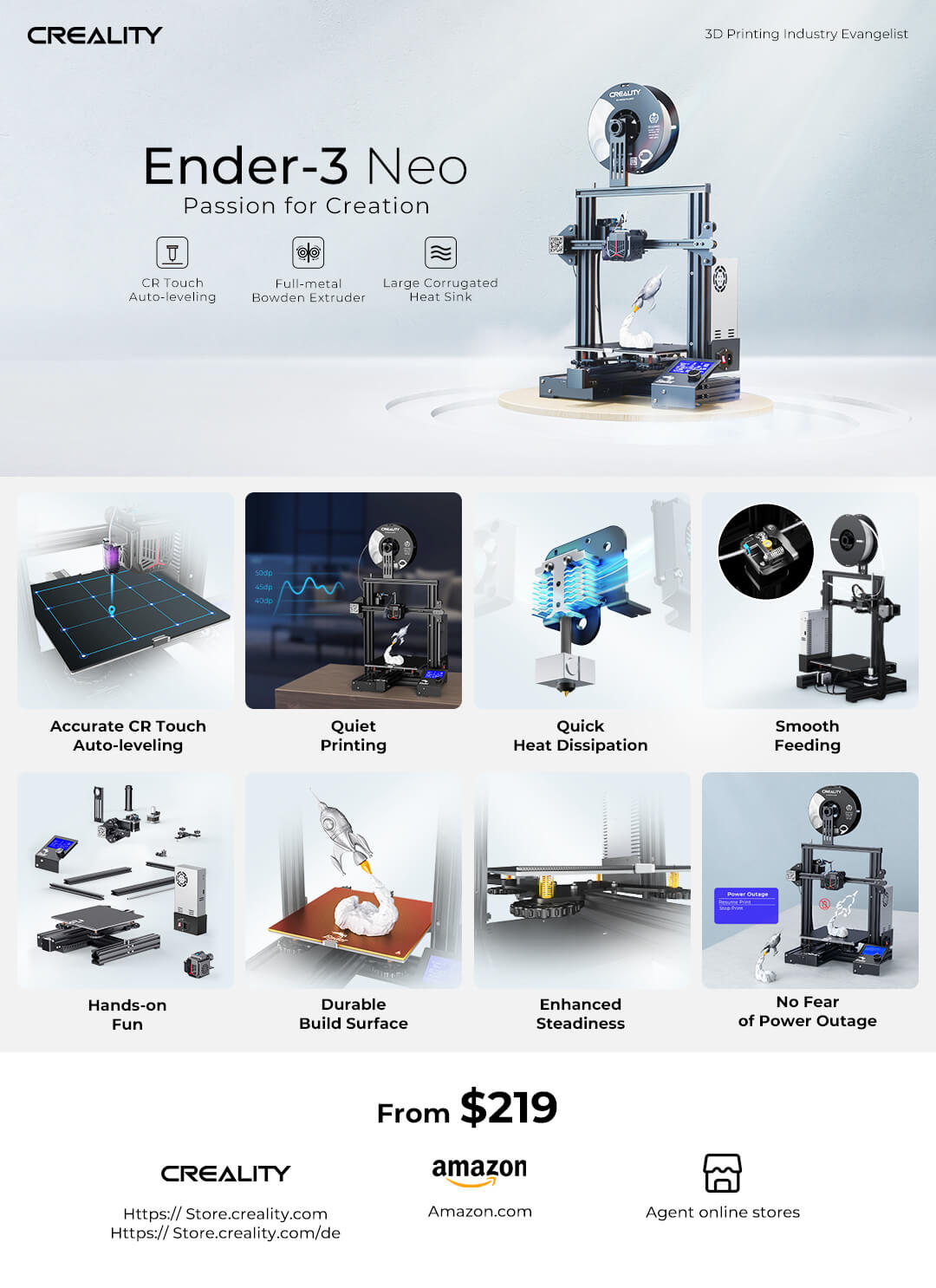 If you prefer a direct extruder and want to take your 3D printing experience to the next level, the Ender-3 S1 series (Ender-3 S1，Ender-3 S1 Pro，Ender-3 S1 Plus) may be your favorite. Carrying Creality’s self-developed “Sprite” full-metal dual-gear direct extruder, you can experience more powerful extrusion force and more choice of filaments including TPU. With dual Z-axis and printing speed up to 150mm/s, the S1 series brings you high-quality printing. It also allows colorful add-ons including laser engraving module, water cooling system and light strip kit. 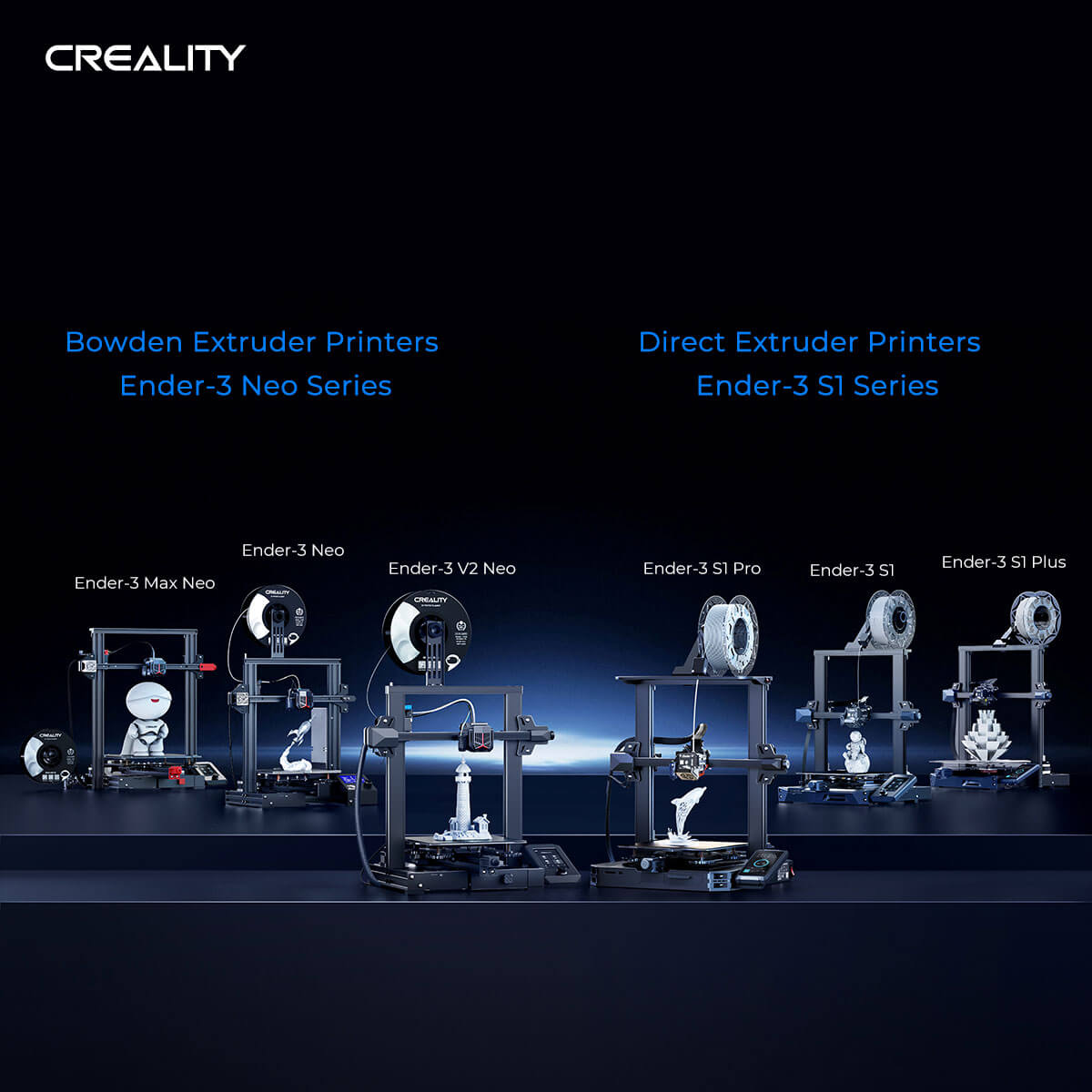 As of now, the Neo series with Bowden extruder and S1 series with direct extruder form the latest Ender-3 fleet. If you find it difficult to decide which series to choose, just keep in mind that the main differences between the Neo and S1 series are extruder type and price. If you prefer a budget printer with a Bowden extruder that is easy to maintain, the Neo series is the right one for you. If you pursue high-quality printing and prefer a direct extruder compatible with more flexible filaments, the S1 series is worth considering.

Both the Neo and S1 series are available at store.creality.com in the United States and at store.creality.com/de in European countries. There are various discounts for you to explore at the official stores. If you are interested in resin printers, Creality is promoting HALOT-ONE PLUS at $399 with a $60 discount. Products are also available on Amazon and other affiliated distributor stores.

On 1 September, Creality will partner with a world’s leading manufacturer to launch professional-grade fully-enclosed FDM printer Sermoon D3 at TCT Asia 2022 in Shenzhen. More information will be announced later on the Creality Official Website. 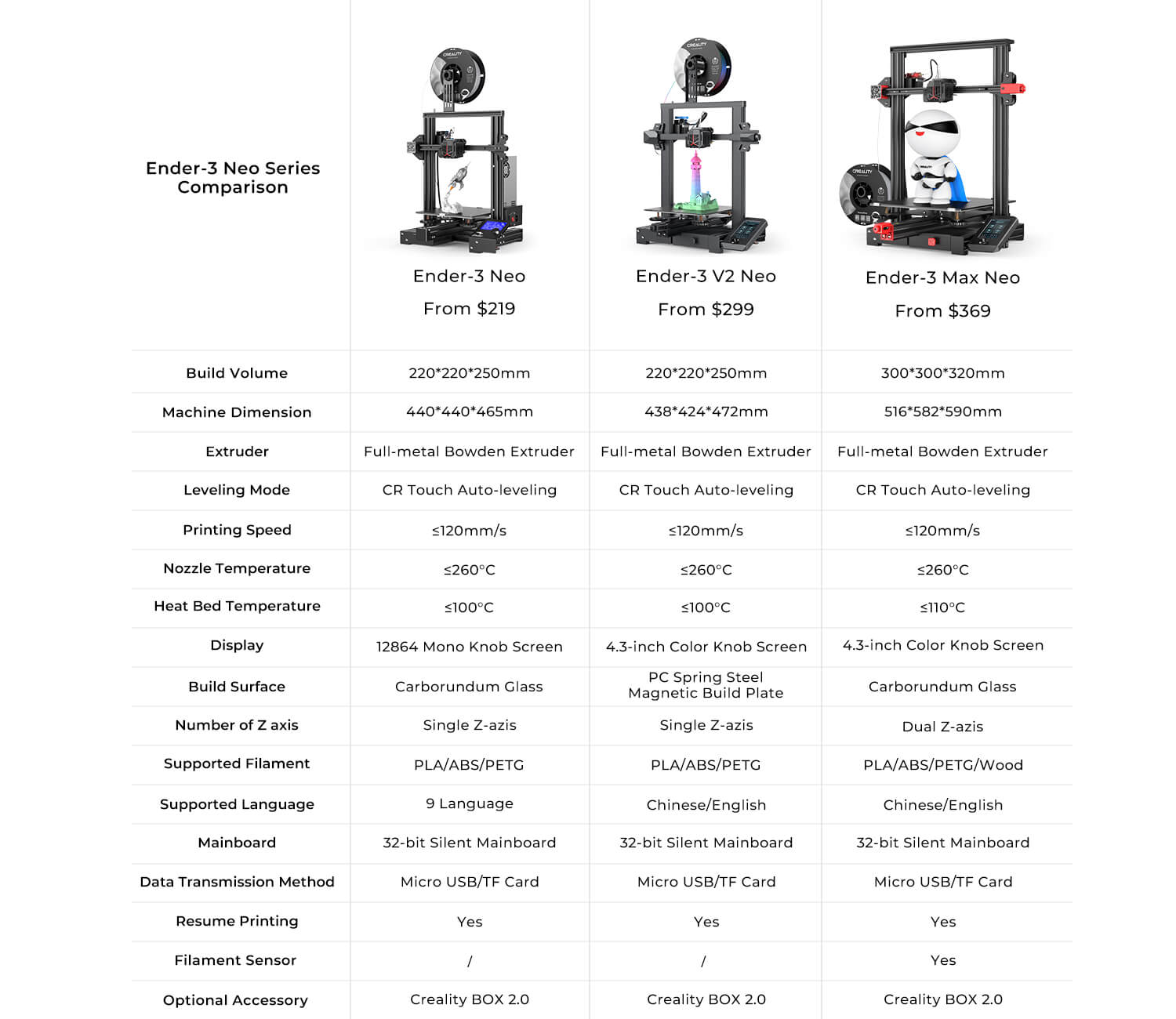 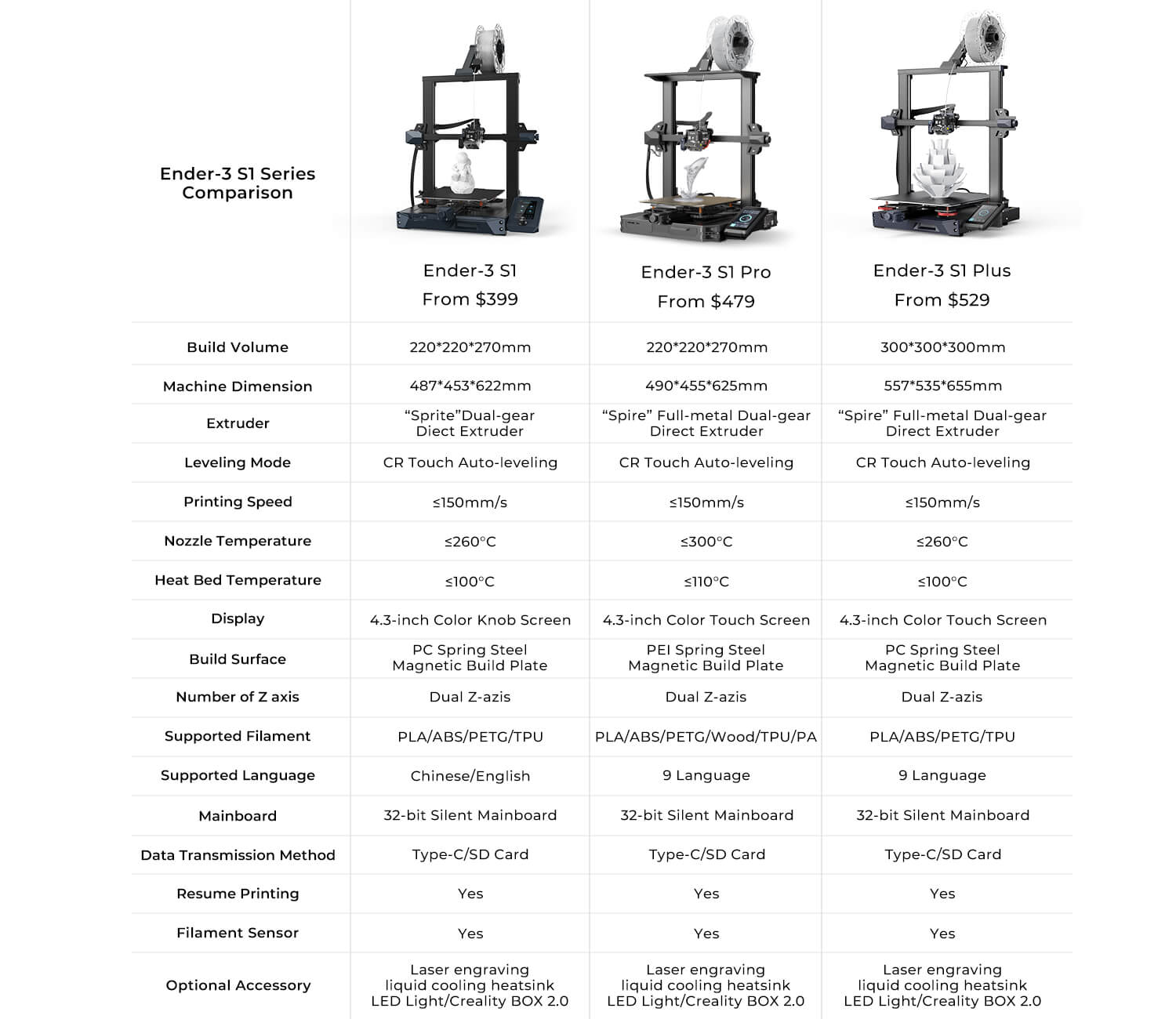