In the desktop 3D printer market, overall build quality ranges across the board, with options at every price point between $200 and $10,000. The cheaper ones usually have lightweight frames while the more expensive ones are as sturdy as a workbench, and frame rigidity has a significant impact on print quality. Craftbot has a reputation for building affordable printers that are built like tanks. We got our hands on the new FLOW IDEX XL for a review, and it’s hard to say if it’s built more like a tank or a highrise.

If you think I’m exaggerating, consider that it’s delivered on a pallet with the use of a small forklift. 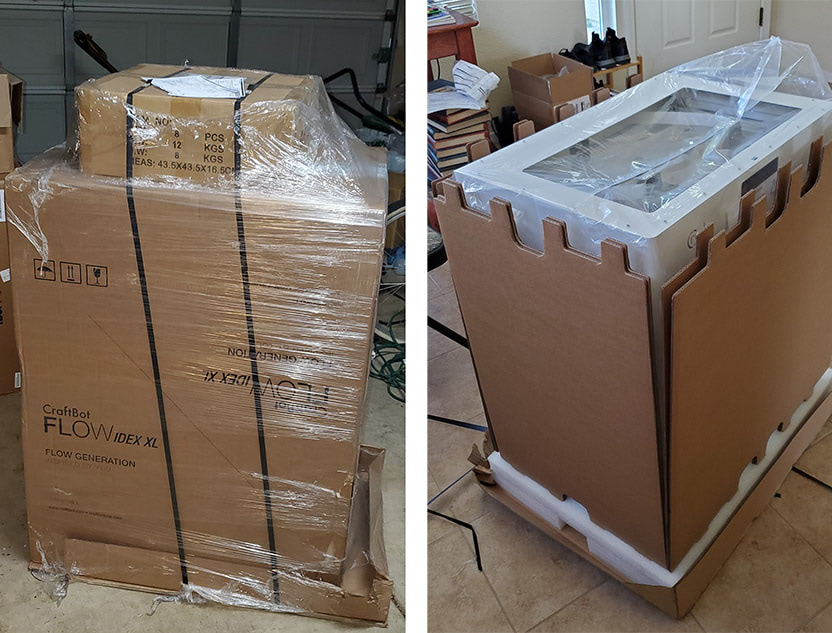 This is probably about as big as a printer can be before it’s no longer in the desktop category. While the size is intimidating, it’s rather easy to unpackage. It does require two people to move due to its size and weight, and thankfully it does have lift handles that are appropriately positioned near the top. A setup sheet in the box provides step-by-step instructions that involve removing the security clamps for shipping and attaching the spool holders and filament guide tubes; it’s well illustrated and clear. And it’s only one page, just how I like my directions. 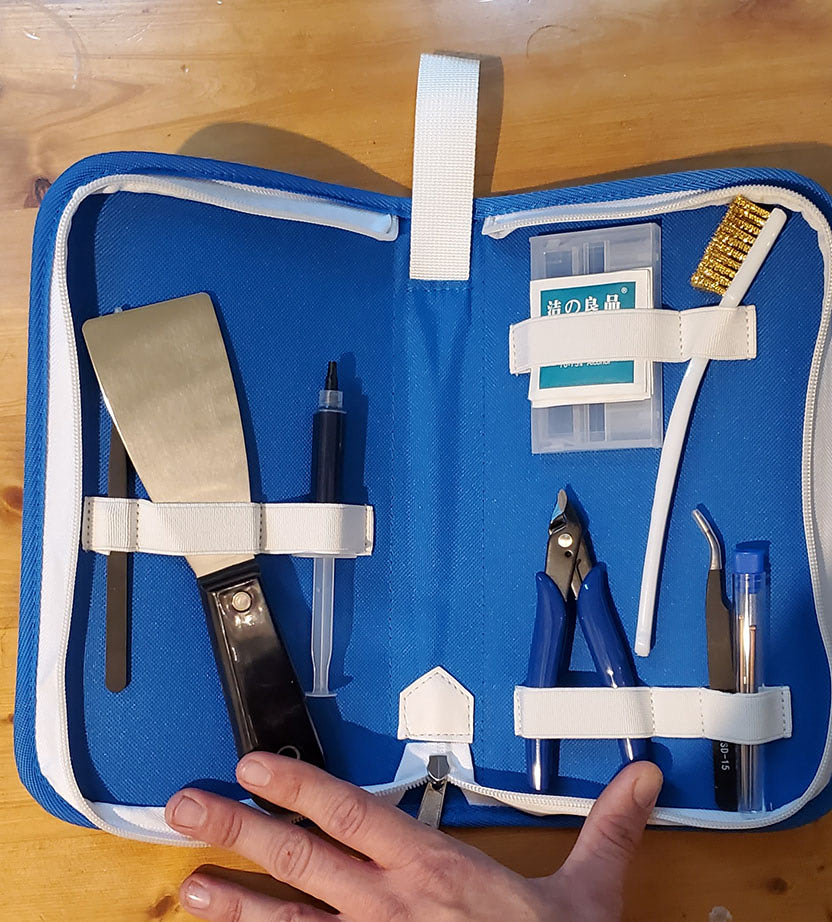 This nice accessory kit includes some handy tools not found in most kits, like nozzle cleaning wires and micro cutters, as well as the typical items such as a spatula, some grease, and a wire brush. 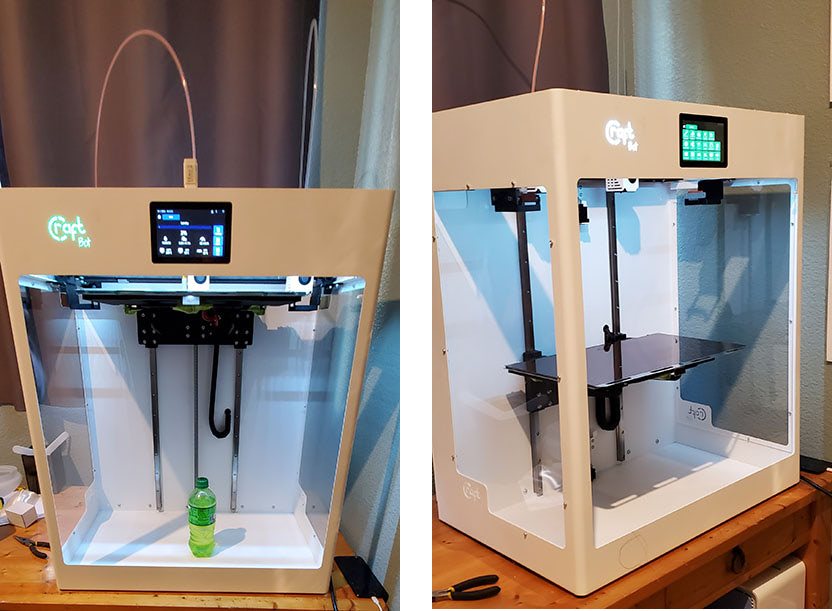 Did I mention this thing is big? That’s a 20oz bottle, for scale. They really aren’t kidding about the XL. It has a build volume of 425mm x 250mm x 500mm. The smallest dimension is larger than the largest dimension of most desktop 3D printers. But the FLOW IDEX XL isn’t a one-trick pony because, as we all know, size isn’t everything. IDEX stands for independent dual extrusion, meaning users can print with different colors and materials as well as print duplicate and mirrored objects. And that’s not all; this printer has features and sensors a plenty. It has mesh bed leveling, filament runout detection, dual-drive extruders, an onboard camera, print resume function, wifi, a Kapton-coated magnetic flexible/removable bed, and even a sensor that tells you if the bed isn’t set correctly. Basically, if a desktop 3D printing feature exists, this printer has it. Craftbot has set a (500mm) high bar for themselves, so let’s see if they can clear it.

There are quite a few calibration options and I ran most of them. There are two bed leveling steps: the first step is assisted by a probe that shows you how much to turn each knob and then there’s an automated mesh leveling process. The first process is simple and intuitive with good visual indicators on the screen as to how the knobs should be turned, though the knobs were so hard to turn that I had to use pliers. The second process doesn’t require any interaction but it does take a while because the head probes many points of the bed at 60°C, then heats to 90°C and repeats the probing, and then it heats to 120°C and does it all again. A thorough process, to say the least. The only thing left to do was load some filament and get printing. Loading filament takes only a few seconds by using the touchscreen or by controlling the printer through its web interface (wifi setup is simple after you look up the default login info on their site), and the extruders heat up quickly. 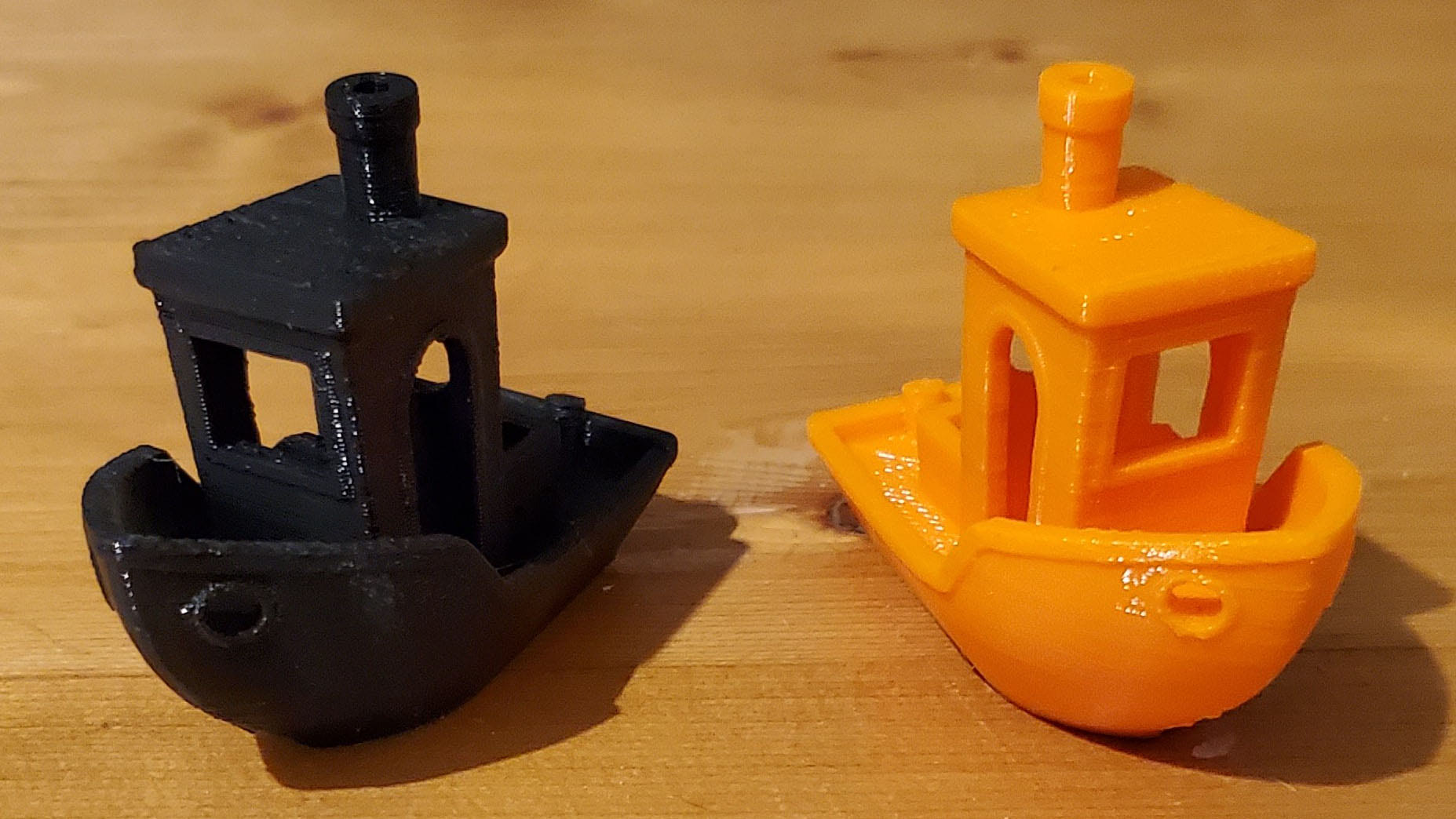 Seeing as this is an IDEX printer, I found it fitting to print two Benchies at the same time. They came out quite well with the mostly default print settings of 0.2mm in their slicer CraftWare. There was virtually no stringing, the arches are clean, and the bridges aren’t sagging. The only issue is some over-extrusion on the black one because I was running their brand of PLA alongside some generic PLA, and their PLA prints with a higher flow rate than most PLA that I’ve worked with. Their PLA prints at a higher temperature and seems to be stiffer as well. I said “mostly default print settings” because despite all of the bed leveling and probing, my first prints weren’t sticking to the bed due to the nozzle being too far away from the bed. CraftWare allows you to make first layer Z adjustments, though, so it was an easy fix. Next up was the All In One 3D Printer Test.

That’s an outstanding print and passes all of the individual tests. Top surfaces are solid, circles are round, text is legible, overhangs are clean all the way to 80°, bridges don’t sag, and the pillars are straight and smooth though not in focus (apologies). The only standardized test remaining is the Bridging Test.

Even at 50mm, there’s no sagging at all. The IDEX XL passed all the initial tests with flying colors so let’s see how it handles more complex tasks.

With any dual-extruder printer, one of the first things I like to test is two-color printing because it’s one of the features that has evolved the most over the last few years.

I can happily report that this printer does the best two-color printing that I’ve experienced. There are only a couple off-color dots on the extremely complex Dual Color Labrador. And I was reviewing this printer through Halloween so I had to print the Octolantern, which came out just as well. Both of these were printed without an ooze shield, just the prime pillar; you can see that in the snapshot I took with the onboard camera. 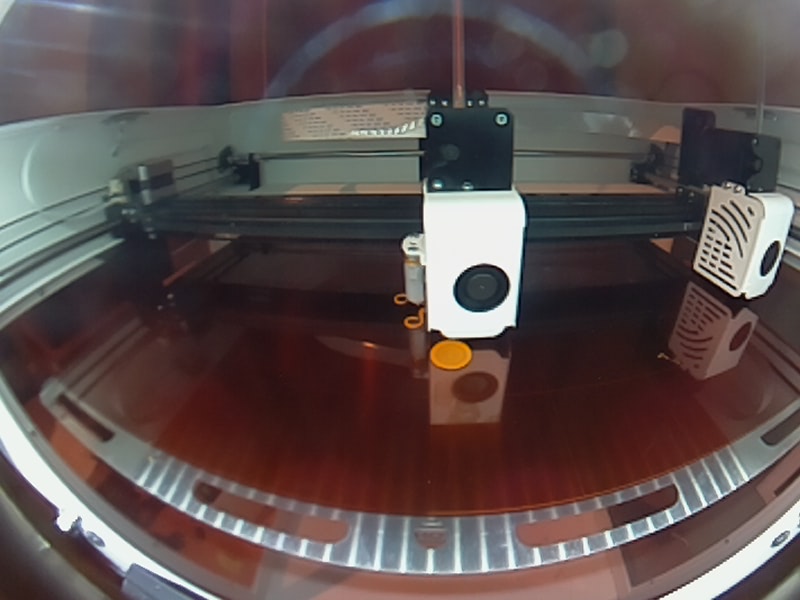 Next, I wanted to test moving parts. Print-in-place parts are growing in popularity because they greatly reduce assembly times. I print a lot of moving parts so this is an important one for me.

This Machine Canister is my go-to test for moving parts and it came out working right out of the printer, and with smooth action at that. Next up was some high-res printing.

This Catwoman Bust printed beautifully. All of the stitches and details are captured perfectly. Let’s move on to some other materials.

Batman looks good in ABS, and this printer handles ABS just fine. Check out how clean those pointy ears are.

This Gyro was printed in Craftbot’s PET and it came out looking good and spinning well.

An Octopus makes for a great TPU test, and the results are quite good. There were a few strings but the overall print quality is exceptional, and some small adjustments to temperature or retraction could help with the stringing.

Finally, I wanted to try something with the IDEX XL that I’ve never been able to do with a 3D printer: print furniture. I designed a stool just for the occasion.

Using 0.3mm layers, this monolith took 80 hours to print and it weighs 2kg, which is quite light for a stool and incredibly heavy for a desktop print. Here it is in the printer where you can see I used nearly the entire build volume (the stool is 345mm x 240mm x 465mm).

And here it is after a paint job that’s as bold as its existence: 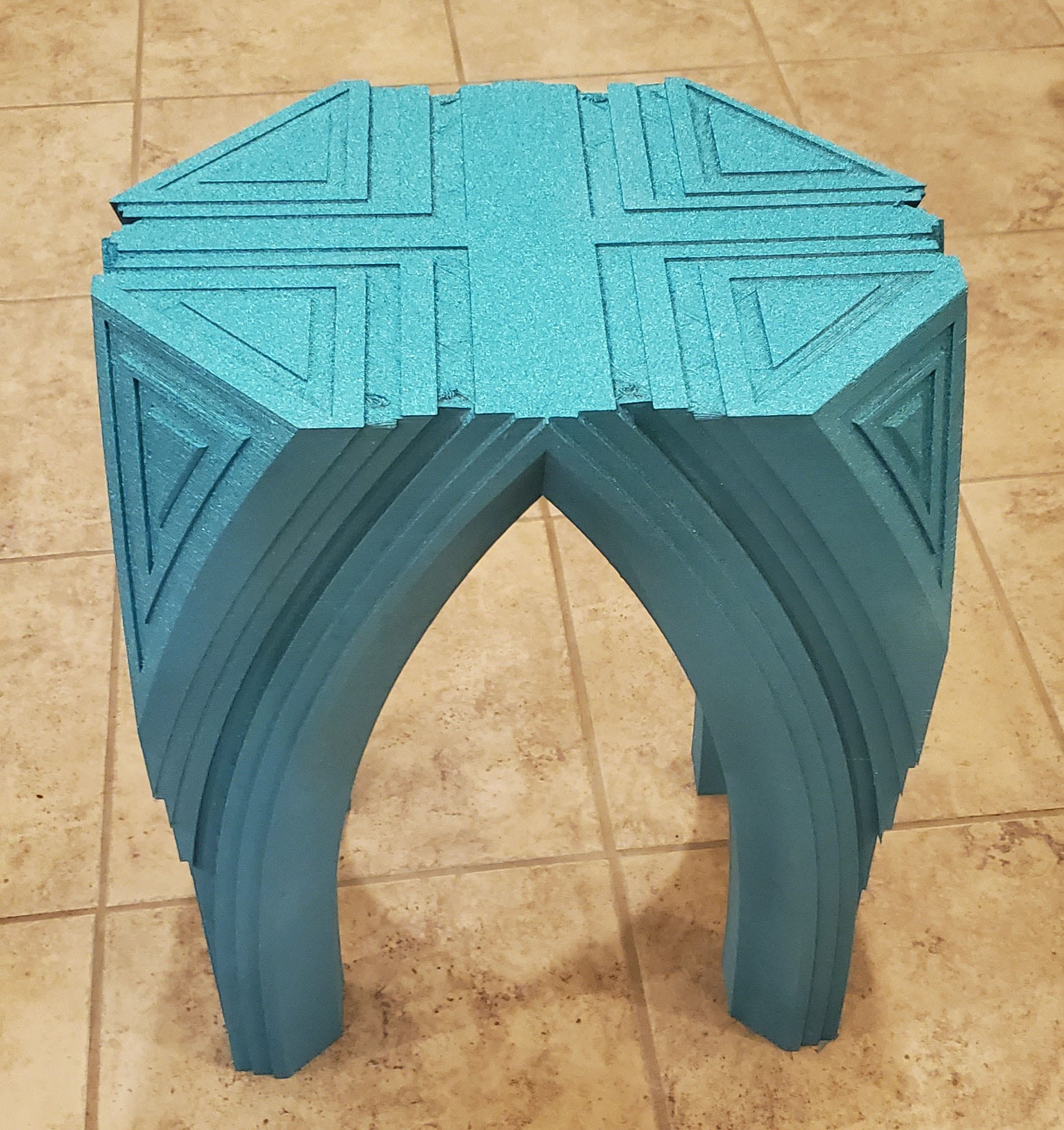 It’s difficult to tell from the picture but it’s actually sparkly. And yes, it works. So you can definitely print functional furniture with this printer.

I always like to get my gripes out of the way first, and there aren’t many here. The biggest issue was the poorly-configured print profiles, which were only set up for their brand of materials that have different print settings than what most users are accustomed to. Their profiles have a flow rate of 100% for PLA, which I found was too high even for their PLA as the over-extrusion was causing prints to fail. Besides that, I think that the front doors should come as a standard feature and not an add-on.

The FLOW IDEX XL may be a bit intimidating with all of its bells and whistles (and mass) but it’s actually very user friendly. It really is built like a tank with linear rails rather than the standard rods, and everything is metal, which means print quality is high. It handles all common materials with its 300°C all-metal hotends. Wi-Fi printing works well, and the browser control with video monitoring is useful. It’s very quiet, enough so that three-day long prints don’t drive you mad, and it’s reliable as it can complete three-day long prints. The removable build plate does everything it’s supposed to do, making it easy to remove prints without having to reach into the printer or scrape up the surface with the spatula. Dual-extrusion works well and is easy to use. There’s also a thriving and active user base to get help and feedback from. Overall, the FLOW IDEX XL is a highly-functional professional 3D printer.

About the author | Cameron Naramore
Cameron is a 3D printer and CNC operator. He's fond of cooking, traveling, and science fiction.
We serve cookies on this site to analyze traffic, remember your preferences, and optimize your experience.
Details
Close