Microfluidic systems may be small, but they’re likely to be among the fastest growing applications for 3D printing in the coming years due to their low cost of entry and production. Researchers at the Indian Institute of Technology Madras and MIT recently developed a 3D printed microfluidic organoid bioreactor that allows for nutrient perfusion and direct observation of specific cells, and it costs only $5 to print.

In their paper published in Biomicrofluidics, the authors explain that their “fully standalone compact bioreactor system provides an ideal organoid culture environment with controlled temperature and media flow, avoids any chance of contamination, and an imaging chamber that allows tracking of a particular cell as it grows, which was very difficult with other techniques.” That’s a lot of details so let’s unpack it for clarity.

Our design costs are significantly lower than traditional petri dish- or spin-bioreactor-based organoid culture products. In addition, the chip can be washed with distilled water, dried, and autoclaved and is, therefore, reusable. Ikram Khan, graduate of Indian Institute of Technology Madras and founder of the cellular imaging and diagnostic startup ISMO Biophotonics

Organoids are “biological systems grown in vitro and are observed to self-organize into 3D cellular tissues of specific organs.” They’re simulated organs used to study diseases and the effects of potential treatments, usually pharmaceutical. They come in a variety of formats but microfluidic systems are common for their flexibility. The conventional method of fabricating the microfluidic systems, however, greatly limited their functionality and increased the time and cost to make them. On top of that, they have to be sealed off in order to avoid contamination, meaning there’s no way to get anything in and out after they’re closed. That’s why the research team developed a 3D printed “microfluidic chip and bioreactor, to enable in situ tracking and imaging of brain organoids on-chip.”

A small lesson in Latin will help to understand the type of research unlocked by their device: ‘in vivo’ means ‘within the living’ and refers to testing on animals and humans, ‘in vitro’ means ‘in glass’ and refers to tests on cells in petri dishes, and ‘in situ’ means ‘in its original place.’ In situ lies between the other research methods, where recreations of organs allow researchers to observe cellular activity in the context of its natural environment without actually being inside a living organism. That makes the research much more cost effective while still maintaining a high degree of accuracy when it comes to the biological test results.

In a conventional in vitro test, “as the organoid grows bigger, its core does not get enough nutrient supply and gas exchange, thereby triggering cell death.” Their printed bioreactor solves that problem with its microfluidic channels that can deliver nutrients and remove gases even as the organoid grows. “One advantage offered by our microfluidic device is that it allows constant perfusion of the culture chamber, which more closely mimics a physiological tissue perfusion than conventional culture, and thus reduces cell death at the organoid core,” explained Khan.

Khan and his team were able to grow an organoid of human brain cells for an entire week in their bioreactor, steadily pumping nutrients in and out just like they would flow in the vessels of a living brain. The organoid wasn’t dying after seven days, either. And because they designed the bioreactor to be observable with a microscope, they could see that it had filled the space of the device and was forming into a ventricle-like structure that, according to Chloé Delépine at MIT, looked a lot like the cavities found in real brains. Furthermore, the surrounding tissue appeared similar to the cellular configuration of a neocortex. All from a $5 SLA 3D print. Wild stuff. Khan launched ISMO Biophotonics with the goal of employing this type of technology to research and develop treatments for Alzheimer’s, Parkinson’s, and other diseases of the brain and nervous system. 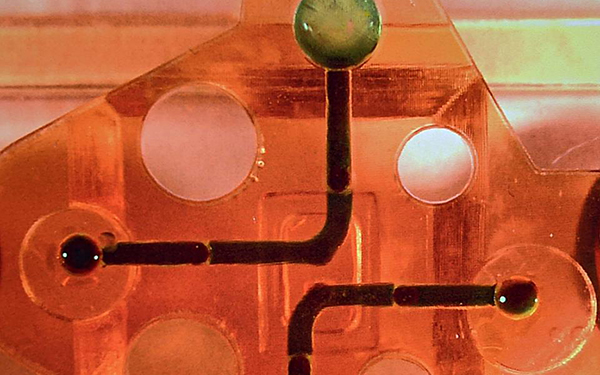