This years’ Olympics in Tokyo have seen a boom in 3D printed sporting goods employed over a range of competitions.

Cyclists in particular have been making use of AM technologies bringing a variety of AM products to the track ranging from 3D printed cranks to lugs to handlebars.

Given the increase in AM hardware in this years’ competition, it was perhaps inevitable that we see the first AM part fail during an Olympic event. And that is exactly what happened when the 3D printed handlebars of Australian cyclist Alex Porter snapped off during the men’s pursuit qualifiers on Monday 2nd August.

You can see what that looked like in the image below. Note the failed handlebars in the top left corner of the image.

Thankfully nobody was severely injured, save for some grazes and scrapes to the rider, which is remarkable in itself when you consider he hit the deck face-first at 65 km per hour.
Under the “recognized mishap” rule, the team is allowed a restart if there is an unavoidable mishap which stops the race, hence the Australian team quickly signalled that they wanted a second attempt.

With just 30 minutes to recover from the face-plant, the Australian team took that second attempt, and came in 5th place with 1st going to the Danish team. This means Australia will be competing for Bronze in the final of this event.

The so-called “Madison handlebars” (pictured below) were produced by Australian cycle company Bastion, who were formed in 2015 by ex-automotive industry engineers. They produce custom cycles and components and claim to be the only cycling company in the world with in-house Titanium 3D printing capabilities. They are using Renishaw printers for the fabrication of their titanium components.

It should be noted that the bikes themselves are not designed by Bastion, rather they have been designed by Canadian company Argon 18. Bastion has designed the AM titanium handlebars to drop directly into the Argon 18 Electron Pro bike model.

Bastion has also designed AM for the stems and cranksets of the Olympic Electron Pro, although it is not confirmed that these AM components were also in use on the bikes on the day of the accident. You can see the printed titanium crank in the image below.

The failed component seems to be a similar design to Bastion’s commercially available “Base Bar”, which has been withdrawn from sale on the company website since the mishap at the Olympics.

The webpage for the product has been replaced with a statement from Bastion, which reads:

“Our team is working with the Australian Olympic Team to understand the cause behind the failure of one of our handlebar units during the four-person, Australian pursuit challenge at the Tokyo Olympics overnight.”

“Our first concern was for Alex Porter and the entire team. We are in constant contact with the Australian Olympic cycling team and coaches, and give our assurances that we are using all means available to investigate why this occurred.”

Cycling Australia, the national administrative body responsible for the sport of cycling in the country has also put out their own statement regarding the mishap and subsequent ongoing investigations.

“While the immediate focus is on the success of the Australian Cycling Team across the remainder of the Olympic program, there will be a thorough investigation and review of the factors involved in the incident.

To ensure the fairness of this process, we will make no comment on the detail of the investigation until it is complete.”

Of course, this hasn’t stopped other commentators from speculating as to the cause of failure, and we don’t mind quoting them.

CyclingNews has suggested that the break in the handlebar occurred at/close to the bolt mounting hole, as seen in the image below. This could, according to the website, suggest that the failure may have been caused by over tightening the bolt.

Naturally, we will bring you the actual details when Bastion releases their findings.

As we saw in our previous article on AM handlebars, there are a lot of riders using similar technology from other companies in this year’s Olympics, so hopefully the findings will be released in a timely manner, so that others may benefit from the knowledge and avoid similar mishaps 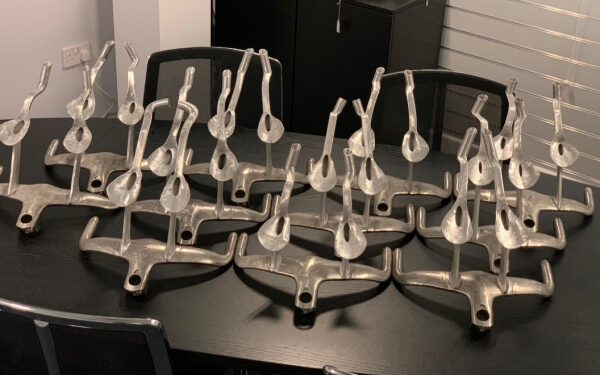