Among the many innovations in 3D printing, this year has seen a massive boost for multi-material applications. Researchers of Singapore University of Technology and Design have developed a new air jetting technology which aids in better multi-material DLP printing.

The research shows the capabilities of a high-resolution, air jet-assisted material exchange mechanism. The air jet removes the residual resin during the process and aids in proper solidification. The mechanism prevents the need for post-processing with harsh chemicals, while also cutting down on waste. The researchers were able to fabricate microlattice structures at a rate of 58 percent faster than other solutions.

The basic mechanism for multiple materials lies in the use of many syringes, each with different resin. Unlike other multi-material processes that operate on several nozzles, the researchers were aiming for a basic extrusion nozzle but without sacrificing quality. While their method of using multiple syringes depositing the resins on a glass plate covered with polytetrafluoroethylene (PTFE) silicone-adhesive tape which allows the part to stick to the platform without adhering to the glass. With this arrangement, they were able to use plain, old commercial resins to create multi-material DLP structures. Moreover, the system can apparently make use of monomers, oligomers, initiators and absorbers as well. 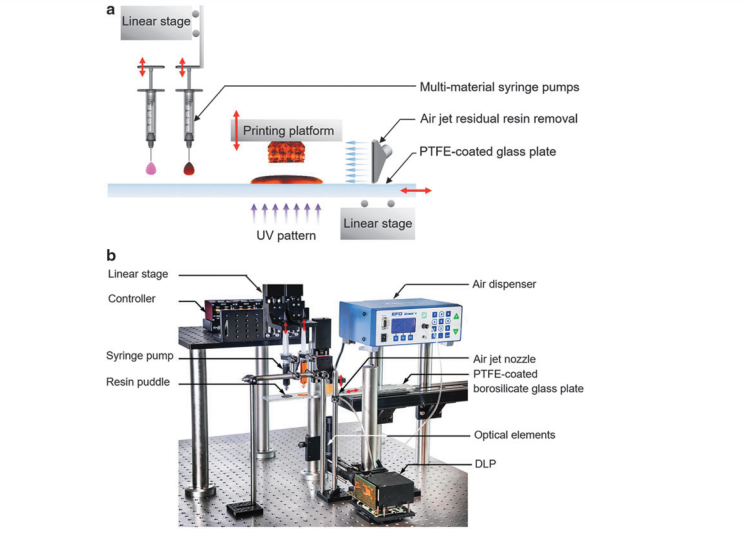 To achieve the multi-material processing, the team used a high-contrast digital micro display with a pixel size of 15 μm. This allowed them to project customized 405 nm images through a borosilicate glass plate with optically clear polytetrafluoroethylene coating to induce polymerization in a variety of acrylate-based photocurable polymeric resins, where each layer contained multiple resin types.

The researchers found that the air jet process offered a sharp transition from one material to another. In fact, they’ve found that further tweaking the system will allow them to make the material wastage almost zero. Similarly, more sensitive photoinitiator additives could reduce the processing time overall.

The researchers also wrote code to control the electronic components of the 3D printer using LabVIEW. The resin grows solid around the glass-liquid interface, moving up toward the platform as they increase the exposure. Complex motion laws and the ratio of light dimness to transparency were also taken into account. The detailed overview of the entire process serves as a stepping stone for functional multi-material DLP in the future.