Creality is coming to Formnext to show off their latest wares including the all new Ender-5 S1, the Sermoon D3, and the CR-M4.

Read on to know more about what Creality has to offer.

You may have heard that there is a new kid on the block, in the form of Creality’s latest addition to the hugely popular Ender series, the Ender-5 S1.

The Ender-5 S1 is the new flagship model that builds on the essence of the popular Ender series. With a 220 x 220 x 280mm build volume, it boasts higher speed and temperatures compared to previous Ender 5 models.

As a professional Ender, its 250mm/s speed is quite a leap from the sluggish 50mm/s of an average FDM printer. The motion system runs with high-precision parts and high-torque motors to ensure stable and quick printing, reliably. According to the Creality Lab, the Ender-5 S1 delivers a 100% success rate for 1,000-hour printing at 250mm/s high speed.

As a result, it slashes the printing time by more than half.

Thanks to the new high temperatures, materials such as PLA, TPU, ABS, PC, ASA and HIPS are all supported. Users can remotely control their printers via the Creality Cloud app on their phone by using the Creality WiFi Box 2.0.

Other features of the Ender-5 S1 include:

The Sermoon D3 features industrial-grade stability, 300°C high-temp printing, and up to 5 times printing speed. According to the Creality Lab, it can print steadily for 8,000 hours without issue The D3 features multi-printer control functionality, which is ideal to scale up production on a print farm.

The Sermoon D3 is the result of over a year’s joint R&D efforts into industrial 3D printing by Creality and BASF Forward AM.

Tests show that it runs well with 14 filaments including PLA, PETG, PC, ABS, TPU, PA and PET-CF. For optimal performance, users may go for HP-ULTRA PLA or Creality/Forward AM co-branded filaments.

The Sermoon D3 and range of co-branded filaments will also be presented at the Creality booth.

Another highlight of the show is the CR-M4. Sporting a massive volume of 450×450×470mm, it’s a real workhorse to create big or life-size models with less post-processing.

The CR-M4 allows users to print big, or batch-print more parts in one go.

It comes with LAN and cloud printing functions so that users can start a 3D print farm for volume production in no time.

Other Creality Products on Show

Of course, Creality has an ever expanding range of products available, and will be showcasing many of them at their Formnext 2022 booth.

Check out the list below to see what else will be on display at the event.

Creality looks forward to seeing you at Formnext 2022, and their team will be on hand to answer any questions you may have about their range of products.

As a reminder, Creality will be at the Formnext 2022 event on November 15 to 18, 2022 at the Messe Frankfurt Exhibition Centre, Germany. The company will be located at booth number A21 in Hall 11.1. 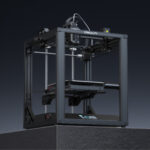