It can be seen as 3D System’s heart-warming Christmas stunt: a dog called Derby was born without his front limbs, but thanks to American 3D printing giant 3D Systems he is now able to run faster than humans. When he was born, this dog only had small forearms, which made it incredibly difficult for him to move like the other dogs. 3D Systems employee Tara Anderson one day decided to adopt him from a foster home, and she wanted to help him. 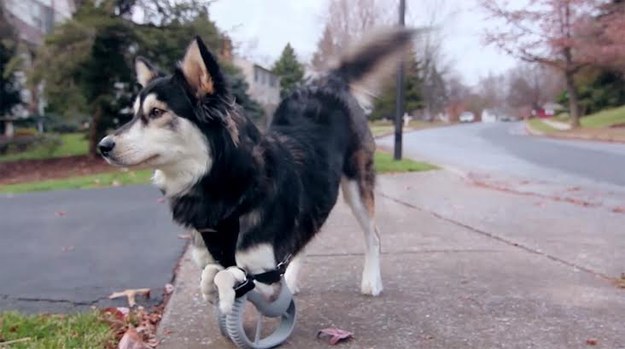 Technically minded as she is, she first tried to let the dog walk with a cart. It sounds like a smart plan, but still the dog couldn’t walk or run in a comfortable way. She then thought of 3D printing, as Anderson works for one of the leading 3D printing companies in the world. She turned to animal orthotist Derrick Campana, who designed 3D printed prosthetics for the dog. He used a 3D modeling program and 3D technology enabled him to create perfectly fitting prosthetics for the dog.

With these so-called 3D paws, Derby can now run long distances with his new owners Sherry and Dom Portanova. In an accompanying video, Campana says:

The great thing about using 3D technology in Derby’s case is having these images on file and being able to print them is a lot easier than having to hand sculpt every single mould and rebuild these braces five or 10 times.

Not only is the dog now able to run for miles, he has become an Internet star as well. The video, which was uploaded on December 15, has already been watched over 5 million times. And that comes along with social media comments. YouTube users smartly mentioned that the 3D paws are still too low, forcing the dog to move on a lower level than he would naturally do. 3D Systems responded by saying they did this to let the dog get used to his new legs. Higher prosthetics are being made, says the company:

We started this way to give him a chance to get used to his new legs. But with 3D printing it’s easy to iterate design, so he is being fitted with progressively longer legs until he reaches his optimal height. Work is ongoing and we are about to 3D print the 4th version of his prosthetics.

On the one hand you could say that this is a smart publicity stunt and of course you’re right, but on the other hand: this project perfectly points out the essence of 3D printing, which is helping others with new technology.