The Geeetech THUNDER Kickstarter campaign has officially started today, and we are going to look at the deal on offer.

Read on to learn more about this new speedy FFF desktop printer. 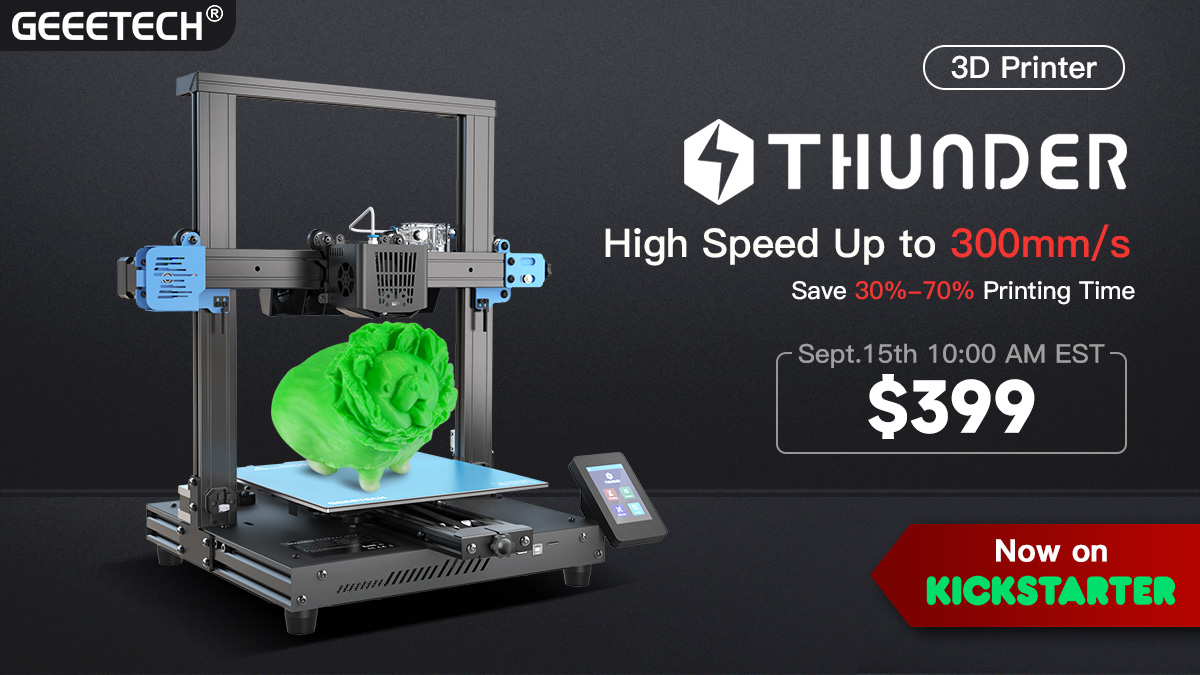 The Geeetech THUNDER has been in development for two years and is now ready for launch.

When compared against the same model and same print quality, these speed gains result in a saving of between 30%-70% in printing time.

From the melting of filament, to extrusion, to cooling, the THUNDER remains stable thanks to its combination of rigid hardware including the all-metal body with dual Z axis design. This ensures stability of the machine when printing at high speed.

And if that’s not enough, there are a lot of features to ensure the printer outputs the best prints.

Heat dissipation is one of the bottlenecks in high-speed printing. The Geeetech THUNDER has been designed with two high-volume heat dissipation fans on the hot end. What’s more, to achieve high-speed single-layer printing, THUNDER also has two larger auxiliary part cooling fans.

All four of these 4 fans can be turned on at the same time with the “One-button Strong Cooling Mode” function.

The Geeetech THUNDER adopts a closed-loop driver. When compared with an open-loop driver using the same stepper motor, closed-loop drivers can produce greater torque, allowing the printer to intelligently monitor the printing process and response in real time.

Geeetech has specially designed a professional damping structure for the Y axis, which intelligently manages the speed changing and largely reduces the vibration rate of the machine. It allows smoother movement for the hotbed.

Combined with the dual CPU control, the THUNDER enables to allocate and manage tasks effectively and respond immediately during high speed printing.

The THUNDER also enables a user mode which users can set and share their customized parameters.

Geeetech offers the HS-PLA filament as an add-on in the Geeetech THUNDER Kickstarter campaign.

The retail price of Geeetech THUNDER 3D printer is $699.

The THUNDER 3D Printer has gone through thousands of tests and is currently in mass production. Shipment will start by early November.

After the campaign ends, the THUNDER will start normal sales on the Geeetech official website.

The THUNDER is now available for pre-order on Kickstarter. Just a reminder, the super early birds will get a special price of $399.

You can see the Kickstarter page over at this link.