We’ve been writing a lot about Olaf Diegel lately, as this guitar player is using 3D printing techniques to create electric guitars, as well as keyboards and even, recently, saxophones. Lots of people followed his example and we’ve seen 3D printed ukeleles, midi controllers and even violins passing the radar. A new London-based company, called Customuse, also feels inspired by Diegel and wants to make 3D printed electric guitars affordable for the masses. The company therefore comes up with customizable 3D printed guitars for 1500 pounds. 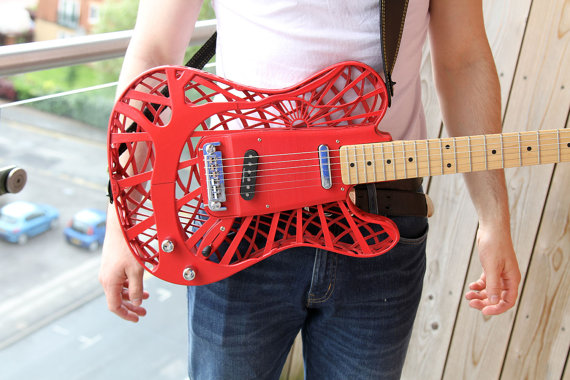 The idea for the company came up because founder Mahdi Hosseini wanted to learn to play guitar himself. His girlfriend wanted to give him a unique electric guitar, but she probably had an expensive taste, as Hosseini states: “she soon realised that anything remotely unique would set us back tens of thousands which was not really a possibility.” They then decided to step into the world of 3D printing, where you could easily make a unique, personalized guitar for a lot less than “tens of thousands”. He decided to cooperate with his friend and 3D printing enthusiastic Justas Cernas to start Customuse.

Customuse has the aspiration to sell 3D printed electric guitars for an affordable price and will be delivering its guitars in approximately two weeks after they’re ordered. There are three models to choose from, which all are all customizable, enabling users to choose things like the shape and design themselves. The company is currently working on software to make this all happen. In other words: 3D printed personalized guitars are not just something for the happy few anymore, but they are now accessible to anyone.

One concern with 3D printed instruments is that they never seem to sound as good as their real counterparts, but Customuse does not see any problems regarding this issue, as they tell 3Ders: “The sound engineers compared our guitars to the most high end Gibson and fender custom-shop guitars and confirmed that our guitars sound just as good, if not better.” Curious about what this will sound like? Here’s a video: