Concrete. Love it or hate it, we sure do use a lot of it. It is the second most used material on the planet, right after water.

As an illustration, concrete manufacturing is responsible for 8% of the Earth’s carbon dioxide footprint. If concrete was a country, it would be the third biggest producer of CO2 after China and America.

And speaking of China, did you know that in between 2011 and 2013, China produced (and used) more concrete in those three years than America did in the entire 20th century?

So what is the point of that preamble?

The point is, cement/concrete manufacturing, while being physically sustainable in terms of resources needed for production, is incredibly bad for the environment.

So to combat this, researchers and companies are looking at different ways of manufacturing cement in order to reduce the amount of CO2 dumped into the atmosphere and also to reduce costs.

Enter ETH Zürich, a research university in Switzerland, who have conceived a system dubbed as Fast Complexity, which is claimed to reduce cement needed by over half the usual amount for buildings.

But this is no standard cement printing process.

Instead the system uses 3D printed reusable molds combined with a 3D printer which extrudes (or rather “pours”) wet cement into the mold according to the defined toolpath.

It is the marriage of 3D printing and concrete casting.

You can see the robot-controlled nozzle pouring the cement into the mold in the video below.

In addition, the setting rate of the cement can be controlled enabling either a runny cement (good for capturing details in the formwork mold) or a thicker, quicker setting cement which can allow taller structures which require no support materials.

The ability to switch between the runny stuff and the thicker, quicker setting stuff also means that the 2 processes can be seamlessly combined, allowing 3D printed forms to be printed directly onto the already-set cast substrate.

Note that the researchers in the video are adding various materials into the printed item such as beams and concrete slab mesh. Like normal concrete production, these items add reinforcement to the slab so that the loads are controlled through the structure.

For the moment, this method is being used primarily for the production of concrete slabs. The researchers state that by using this method of 3D printing, they are able to print usable features on both sides of the slab. Apparently traditionally made decorative slabs only have features on one side.

In addition to the extra complexity enabled by the system, the team says that the process is less labour-intensive, and less costly than traditionally made decorative slabs.

You can check out the research group and the work they are doing over here. 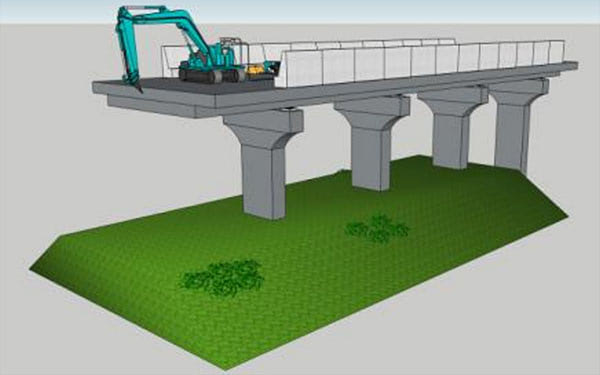