Purdue has recently partnered with VELO3D to 3D print a fuel injector that can replicate hypersonic conditions in their lab. This is a large step forward for hypersonic research and will allow the group to iterate hypersonic designs faster than ever before.

Purdue has been leader in hypersonic research space for awhile and recently invested heavily ($18 million dollars to be exact) to establish The University’s Hypersonics Advanced Manufacturing Technology Center (HAMTC) with the help of Lockheed Martin, GE Additive, Dynetics, Aerojet Rocketdyne, GE Edison Works, Boeing and others on the technology to get the facility off the ground.

Over the few months since the initial funding, it sounds like the facility has made massive strides. However, they were still hampered by a large issue; testing parts at an above Mach 5 level. They found this region hard to test because of the difficulty to predict or model the physics that would give them reliable data to use when building their parts. The physics behave very different than what is experienced at slower speeds, and even the best computer simulations can not predict the turbulent flow experienced during hypersonic conditions. The group needed to find a way to reduce the cost of their experimentation while gathering real world feedback in the process.

Purdue eventually partnered with VELO3D to help solve their problems and printed a burner with complex geometries that creates a hypersonic environment in a testing cell.

Getting to that step, however, wasn’t easy, but much faster than would have been possible with traditional (subtractive) manufacturing. The long and often drawn out process of tooling, mold-making, and design iteration was significantly reduced by using additive manufacturing to make the parts. The partnership iterated through multiple flow passage designs, and after about two weeks, they were able to find an injector that gave them the performance they desired.

Even the engineers, who were skeptical about 3D printing at first, touted its benefits on this project saying, “AM techniques significantly shortened manufacturing lead times as we optimized our designs. Additive (manufacturing) is really helpful in the research context where we are continually trying out different configurations of parts. At the same time, with this 3D-printed injector part, we couldn’t tell the difference between it and a machined part in many ways. Ten years ago this technology seemed like a fantasy, but we are now getting AM parts that can go straight into our engines off of the printer—which is pretty amazing.”

The 3D printed fuel injector is now being scaled up and the design is being used to create a full-scaled system where they can experiment at hypersonic conditions while standing still.

With these additions, the HAMTC seems on its way to becoming a state-of-the-art facility for testing hypersonic components. We are sure 3D printing will continue to play a roll in the facility, especially with the rave reviews and the ability to iterate and design parts that are not possible through more traditional means. It will be interesting to see how it exactly manifests itself, but with the renewed attention the field has been seeing there will no doubt be a need to continue developing the next line of hypersonic parts. 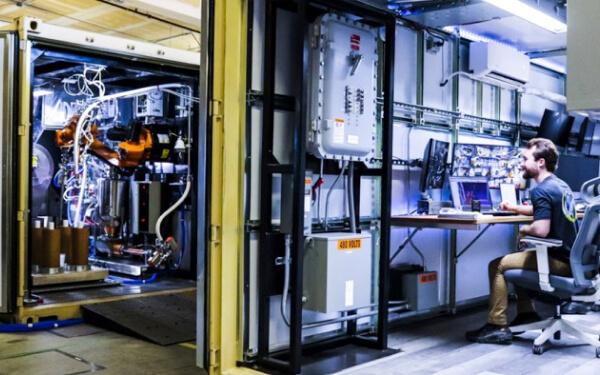 Share:
WhatsApp Twitter Facebook LinkedIn Buffer Reddit E-mail
About the author | Ben Perez
Ben is a freelance science writer and illustrator. He graduated from The University of Texas at Dallas with his Ph.D. in Materials Science and Engineering, where he researched novel polymeric materials for 3D printing. He now combines his love for storytelling with his deep technical background to deliver the latest news in 3D Printing.