Large-format 3D printing has become rather popular among paleontologists as the technology allows them to both study and preserve the delicate fossils that they regularly handle. Alberta’s Royal Tyrrell Museum is the latest adopter of AM for the purpose of recreating dinosaur fossils.

For Amy Kowalchuk, a Royal Tyrrell Museum 3D technician, 3D printing provides a welcome relief. Many of the fossils she works with are extremely fragile, to the point that it’s unwise to even display them. “Especially in paleontology, we’re dealing with priceless specimens that are very, very delicate and you really don’t want to be damaging them,” said Kowalchuk.

By 3D scanning and then printing the more delicate pieces, she can prepare exhibits for display that would otherwise be too risky to assemble, such as a 41-piece T-Rex skull. Much of Kowalchuk’s time is spent digitally documenting the fossils as she explains, “You just have to take multiple photographs from multiple angles and then from that, you can triangulate them using computer programs, and then that gives you your 3D model.”

Another curator, François Therrien, is using the 3D printed fossil replicas to advance his research on the behavior of the Tyrannosaur Rex. By recreating the brain cavity, he can better examine the anatomy of the brain, which informs him about possible behavioral traits like hunting.

Before, trying to reconstruct the brain structure or the brain shape of these extinct animals required a lot of work. We needed to break the bones or have skulls that were already broken and then pour latex in there, try to peel it out and then a cast of the brain cavity. Now we can all do that with a CT scanner and 3D printing, so we can ask a lot of questions that previously would have been impossible to do. François Therrien, curator Royal Tyrrell Museum

If paleontologists have to choose between breaking ancient fossils or harmlessly recreating them with 3D printing, I think we know what they’re going to choose.

With images from Allison Dempster and Colin Hall 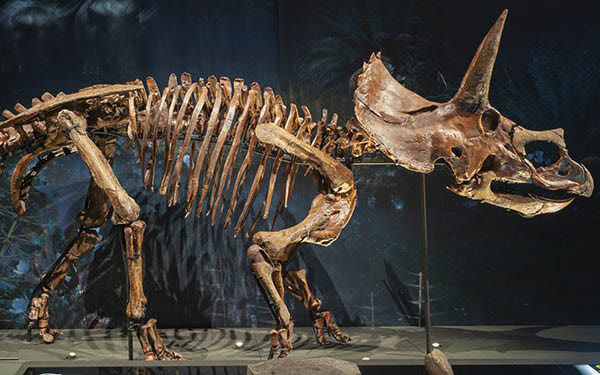