One of the major hurdles in the collective effort towards space exploration is the transport of tools and materials. Due to the weight and speed limitations necessary to exit the Earth’s atmosphere, scientists have had to stock spacecraft’s sparingly. Another consequence of this has been a need to decrease time spent on outer space voyages.

One of the ways in which aerospace engineers and rocket scientists have been trying to mitigate these factors is 3D printing soil. By printing on location, astronauts may be able to diminish the issues related to weight and space. Researchers at Northwestern’s Mccormick school of engineering have developed a novel means of processing martian and lunar soil. 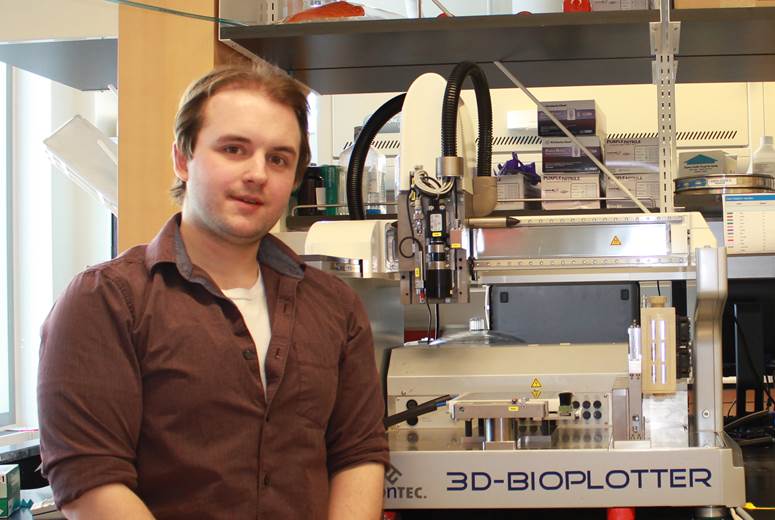 This new method is an extension of 3D painting methods. As a result of 3D painting and inks the team can process functional and structural parts. This method is space travel friendly and cost-effective, as well as light weighted in terms of transport costs. Another benefit of this method is that it doesn’t require lasers or intense heat.

The texture of the materials is composed of micro-rocks. Despite this, the material is quite flexible. The texture is quite similar to rubber in this regard. Compositionally, it is 90% dust, so it is quite light as well. The material itself can be folded and rolled. As of right now, the team is working on a means of solidifying the material and creating harder structures from it. They theorise that the use of a furnace may potentially let them achieve this. 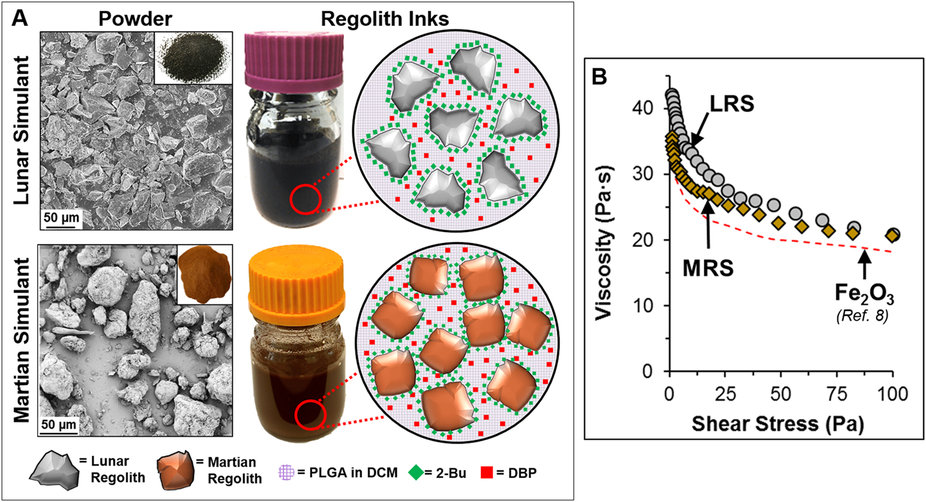 Source: Nature.com (A) Representation of the Lunar and Martian regolith simulant inks, LRS and MRS, respectively. On left, scanning electron micrographs and photographs (inset) of sieved JSC-1A lunar regolith simulant and MARS JSC-1A Martian regolith simulant powders. On right, Photographs of ~100 mL of LRS and MRS inks and schematic representations of the ink compositions and hypothesized, individual component distributions. (B) Viscosity as a function of shear stress of LRS and MRS inks. Viscosity as function of shear stress of previously reported 70 vol.% Fe2O3 inks8 shown for comparison.

Northwestern’s Tissue Engineering and Additive Manufacturing (TEAM) lab undertook this project. The team has been conducting novel research in the fields of 3D printing, bioprinting and 3D printing materials. Their previous projects included the creation of hyper-elastic surgically friendly bone. The team is led by professor Ramille Shah.

On their page they define their mission statement accordingly:

“We are developing novel processes for engineering novel 3D-inks and greatly expand the variety of 3D-printable materials. Defining “printability”, or the characteristics that enable a material ink to be successfully 3D-printed into a bulk structure, is also another major focus of the group. Once a material ink becomes printable, the Shah TEAM lab optimizes the ink specific 3D-printing parameters and fabricates objects for both fundamental testing as well as direct application.”

The research manuscript is available here.