Although the days of fully 3D printed organs are not here yet, every day medical researchers inch closer. Previously, Tel Aviv University developed a miniature functional 3D printed heart, while firms like BioLife3D are carrying out experiments with various types of cardiac patches. Although, researchers from multiple universities are tackling another line of cardiovascular tissue development. Their method for SLA organ printing has allowed them to turn food dye into a network of vessels similar to ones in the human body.

As with most such experiments, the team was using bioprinting’s most common new tool: hydrogels. Using a method the researchers dubbed “SLATE” (stereolithography apparatus for tissue engineering), they mixed the food dye with hydrogel as it came into contact with the light source. The team were thus able to create fake lungs with the ability to oxygenate the blood and pulsate without splitting open. The design functionally acted as a network of “alveolar air sacs”.

Aside from simply creating external models, they also tested the structures containing liver cells implanted within mice. The tissues contained separate compartments for blood vessels and liver cells as they went into mice with chronic liver injury. The liver cells survived and adapted to the biology of the rodents.

“The body contains various networks of ‘pipes’ that bring nutrients to—and remove waste from—the organs in our body,” says an assistant professor and study co-author Kelly Stevens from University of Washington. “Many of these pipe networks in the body are entangled, so they have been very hard for scientists to replicate by 3D printing. This new method allows us to create multiple entangled networks of pipes in 3D-printed tissues. We were surprised to see how structurally complex of features we could print with this new method.”

This newer SLA organ printing method allows for a freedom of control that previous methods were not privy to. It introduces pixel sizes ranging from 10-50 microns giving it a fine level of control per layer. This is also where the food dyes come in. The food dyes absorb blue light and these photoabsorbers confine the solidification to a very fine layer. As a result, it produces soft, biocompatible hydrogels with intricate internal architecture in a matter of minutes. 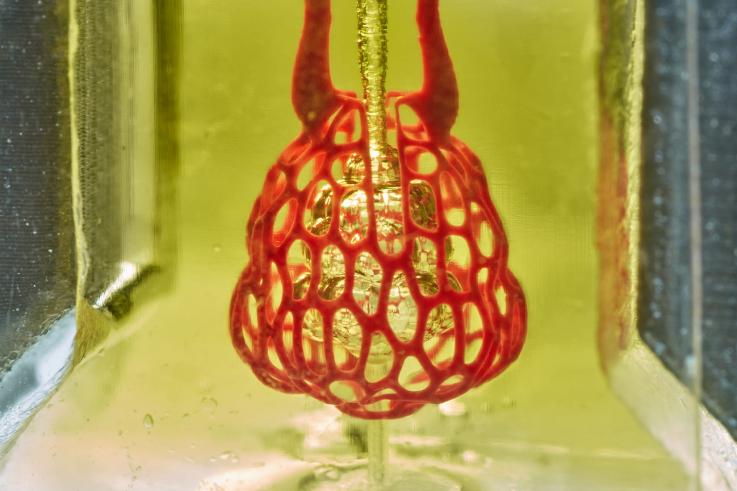 “Further, our organs actually contain independent vascular networks — like the airways and blood vessels of the lung or the bile ducts and blood vessels in the liver,” added bioengineer Jordan Miller from Rice University.”Ours is the first bioprinting technology that addresses the challenge of multivascularization in a direct and comprehensive way.”

The organ printing method could drastically streamline the donation market and aid thousands of patients in need. Moreover, it appears Miller is a longstanding champion of open-source 3D printing. As such, all the source data from the experiments in the published Science study is freely available. Same goes for the 3D printable files needed to build the stereolithography printing apparatus.