When it comes to sheer scale in additive manufacturing, it’s hard to find a company better than Thermwood. We’ve previously covered their ginormous large-scale printing devices (LSAM) and now they’ve added some new options for it. Their new vertical layer printing technology allows LSAM machines to print parts that are as long as the machine table. This new addition vastly expands the build volume beyond its previous abilities. 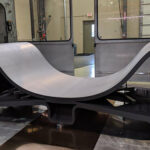 The printer achieves this with the use of a second moving table. This table remains perpendicular to the main fixed horizontal table, moving with each complete layer. As a result, it grows the part along the length of the machine as opposed to growing it upward, providing far more space. The company has, so far, tested it with a variety of polymers including PSU, PESU and PEI. The tests have already shown promising results. One of the first parts Thermwood printed with the VLP option is a 12 ft long, carbon fibre reinforced ABS trim fixture for use in the production of the Boeing 777X aircraft.

In addition, Thermwood’s ‘controlled cooling’ print technology manages the temperature and minimises sagging. Ordinarily such a part would sag and deform under a uniform temperature, in much the same way traditional thermoplastic composite printing can.

During vertical layer printing, the print rides on a series of Teflon coated stainless steel belts. The belts and table drives fit onto any LSAM that is at least 20 ft long. Their design allows them to process parts which weigh up to 50,000 lbs. This massive weight and the quality of the part under vacuum control makes each print aerospace and automotive industry standard without the need for any additional coating,

The most obvious benefits of this set up is the sheer size of printed parts. It removes the need for printing smaller parts and bonding them together. While bonding may be a faster process overall, part integrity can offer suffer. Additionally, depending on the part, waiting for the adhesive to settle can be just as long and may require precise temperature conditions. This is particularly problematic with parts that are made of highly chemical resistant materials.

Additionally, the system is an option as opposed to an entire device itself. This means that users can switch between vertical and traditional LSAM as they see fit. It takes a matter of hours, but the utility is very clear for anyone that needs a versatile work operation. 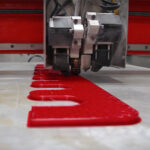