Researchers at the University of Washington have developed a ground-breaking new means of printing objects that are capable of communicating with other devices without the need of electronics. The research details how a toolkit for wireless tech allows the 3D printing of these devices with standard 3D printer filaments. These devices can contain weight scales, flow sensors and anemometers that can transmit sensor data.

As a result, the researchers have opened up the potential of sending signals to wifi receivers with no battery required. This data enables devices to inform the user of changes in weight, air pressure or water flow automatically.

The researchers used “Backscatter techniques” to power the communications tech. Backscatter systems use antennae to transmit data by reflecting radio signals emitted by a WiFi router or other device. The devices use a conductive printing filament that mixes plastic with copper as the base for the antenna. The team even borrowed principles from the watchmaking industry similar to those in battery free watches. These methods are also reminiscent of watches in their use of gears and switches. 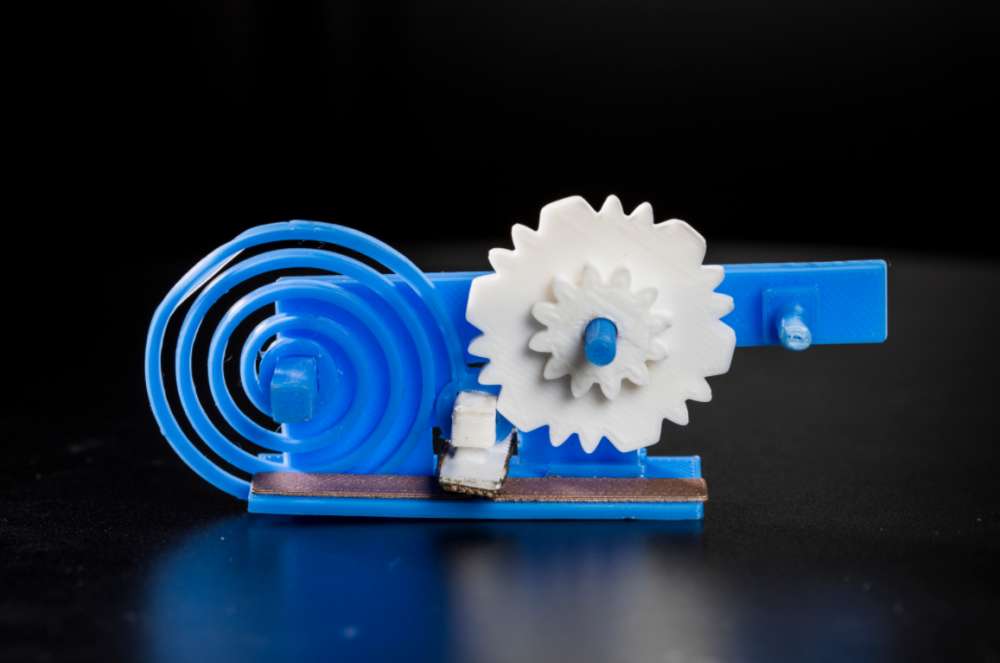 The gears within the device cause a conductive switch to intermittently connect or disconnect with the antenna and change its reflective state. This happens when someone uses the object, like pouring something out of a bottle. The teeth of the gear act as the 1’s and 0’s of the binary code (0 being an absent tooth). Due to these gears weight or pressure changes can be detected, whereas width and the pattern of gear teeth control how long the backscatter switch makes contact with the antenna.

This technology can have some very interesting applications. One of the uses that the researchers demonstrated is that of a sensor for how much detergent is in a bottle. Simply put, the device can tell you when you’re running out of laundry soap.

“As you pour detergent out of a Tide bottle, for instance, the speed at which the gears are turning tells you how much soap is flowing out. The interaction between the 3-D printed switch and antenna wirelessly transmits that data,” said senior author Shyam Gollakota, an associate professor in the Paul G. Allen School of Computer Science & Engineering. “Then the receiver can track how much detergent you have left and when it dips below a certain amount, it can automatically send a message to your Amazon app to order more.”

As mentioned earlier, the devices consist of standard thermoplastics allowing even household printers to make them. The researchers have also made their CAD models entirely available to the public. As a result, 3D printing enthusiasts can create their own wireless devices including battery-free slider that controls music volume or a button that automatically orders more cornflakes from Amazon.

More advanced uses of the device could also include leak detection. Imagine a device that could alert you to a water leak in your house. It could communicate warning through the wifi sensor and would not require constant charge. Similarly, they have demonstrated the ability to create volume controls and such devices. The technology is still in its infancy but shows a lot of promise. It will be interesting to see what possibilities emerge from it.