Home / Use Cases / 3D Printed Sneakers in 2021
Join our newsletter

Remember when 3D printed shoes were exclusively the domain of engineering websites and CAD/topology optimization sites, all vying for your attention to tell you how great their manufacturing and design processes were?

Well those days are seemingly long gone, with sportswear manufacturers such as Adidas expanding their lines of AM footwear for greater adoption.

You may recall back in 2017, Adidas announced that they were releasing their 4D line of shoes with 3D printed midsoles, manufactured with use of the Carbon 3D printing system.

We did an article back then, explaining how Adidas were initially releasing just 5,000 pairs of the shoes to the public, and had aimed to sell 100,000 pairs of the AM-infused designs by 2018.

With their latest iterations of the shoe, it seems that they have surpassed that goal, or are on their way to surpassing it. The shoes are available all around the world from local Adidas stores and also from various 3rd party online outlets.

With that in mind, it seems that 3D printed shoes are firmly implanted in the public’s mind.

Let’s have a look at the original shoe from 2017, and the latest offerings for a comparison.

Since then they have not only focused on the Futurecraft range, but have also added the Ultra 4D range, as you can see below.

This year’s Futurecraft 4D line are based on the initial shoes from 2017, and are available in a wider range of colors, which we will look at later.

Last year, the sportswear company also announced that they would be employing some CNC-aided goodness for production of the shoe upper as well as the midsole.

The Futurecraft.Strung shoes utilizes a robot looking like a cross between a Kerplunk and the robot leader from The Animatrix, to lay down individual fibres on the shoe upper, which are optimally placed according to an athlete’s biometric data.

You can see the robot in question below:

You can see the Futurecraft.Strung shoe and a close up of its robotically laid threads in the image below. As you can see, they are sticking with a Carbon-printed midsole in this variant also.

The shoe was announced last year and will be available later in 2021.

AM Shoes for the Masses

While the robot-string shoe is highly customized by nature (hence we won’t be seeing them on physical shelves), this year’s Futurecraft 4D range are off-the-shelf and you can find them via various vendors right now.

This year’s first release, the Futurecraft 4D Fusio, got a lot of press when it was announced earlier this year.

I don’t know enough about sneakers to make an informed commentary on the design itself. But the shoe is now orange and pink, and it has a big pink panel on it. The panel is made from TPU (a material well known to 3D printing fans), but it does not appear to be 3D printed, rather molded.

There will be more releases throughout the year, and a simple Google search of the term Futurecraft 4D should bring you to a bunch of vendors selling these shoes (in the region of $200-$300) per pair.

According to reviews, these 3D printed midsoles are way more comfy than standard midsoles, which are manufactured via molding. 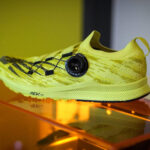 BOA Steps Up Their Prototyping Game