Home / Use Cases / DustRam: From Prototyping To Manufacturing With 3D Printing

When we talk about prototyping and manufacturing with 3D printing it’s not usually in reference to the same company, but the DustRam product serves as a terrific example of just that. Jack King was not planning on becoming a manufacturer when he invented the DustRam; he was only trying to solve the problem of dust that’s produced during the demolition of flooring. 3D printing helped him solve that problem and then some.

King’s flooring removal business, Arizona Home Floors, produced a lot of cement dust. The dust makes a huge mess and is swept and vacuumed up after the demolition process. But it’s also hazardous to breathe so it’d be much better if the dust could be captured AS it’s produced. King designed the DustRam to attach to a chipping hammer to vacuum the dust right where the chipping is occurring. His prototype was made out of aluminum and steel, requiring the use of several expensive manufacturing methods to fabricate, such as machining, wire EDM (electrical discharge machining), and TIG (tungsten inert gas) welding. 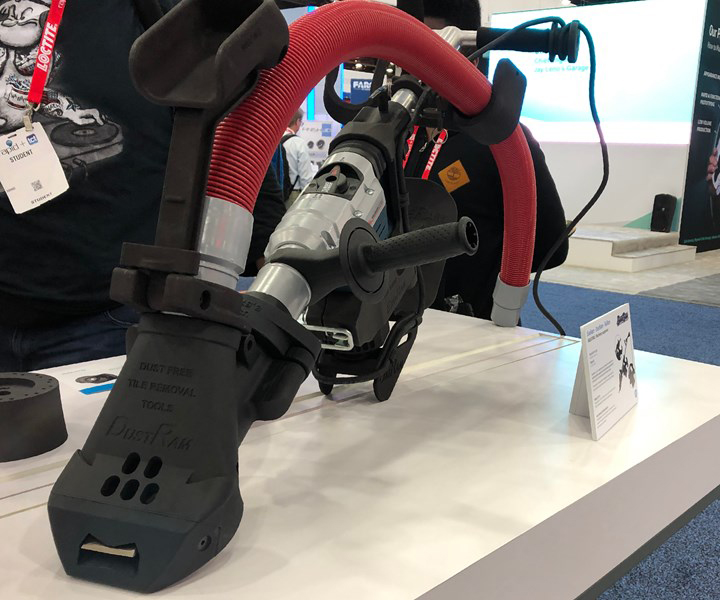 The prototype worked great so the next step was figuring out how to create a plastic version that would be cheaper and lighter. Injection molding is the traditional choice for tough plastic parts but the high tooling costs only make sense for high-volume runs, which would not apply to a niche product like the DustRam. The number of components and complexity of geometries also ruled out injection molding as an option.

A 3D printed nylon prototype of the DustRam was still functioning well after months of use so, naturally, King turned to 3D printing for his manufacturing needs as well. He initially purchased an FDM printer but soon upgraded to an HP 4200 Multi Jet Fusion system for tougher parts and increased production speeds. Having 3D printers for the manufacturing of his parts means he can also improve designs more effectively, especially when modifying multiple parts at once.

It’s bad enough when you have to get an injection mold just to build a single part. Plus, we’re constantly tweaking the parts and doing things on the fly. You can’t do that with an injection mold, and it costs a lot to try it at all. Jack King

DustRam LLC now offers a full line of mostly 3D printed dust-free floor removal accessories that are sold to qualified contractors. Dozens of components are printed in nylon PA12 on the HP MJF system, which can print up to 100 parts over 17 hours. King was also able to consolidate some of the assemblies with 3D printing, further reducing production times and costs.

One of the biggest value adds from adopting 3D printing was the drastically-shorter product development time. King explains, “You can go through eight iterations in the space of two or three weeks. We can build something, take it out to the field, test it, see if it breaks, if it’s too small, then change the CAD model, reprint another one, take it back out to the field. Something that would take two years to do previously you can do in two weeks.”

King is producing quite a few DustRam products but he does still sometimes have excess production capacity on his 3D printer, so he’s been manufacturing components for others. “Now, not only can I keep on top of my inventory without any sweat, I also have time to print for other people if I want,” King says. “Without a 3D printer there’s just no way I could afford it. There’s no way I’d be manufacturing without it.”