There’s no question that 3D printing has moved beyond making prototypes and one-offs. The adoption rate of 3D printing by Fortune 500 companies can no longer be accurately described as slow. Whereas AM was once slow, costly, and limited in its applications, it’s now outperforming conventional manufacturing in those same metrics. Manufacturers and producers are using 3D printers for fabricating parts at various points in the production line, including manufacturing tools, jigs, and fixtures, fit tests, and of course end-use parts. The transition to production applications is not just about improving the hardware of 3D printers to the point of replacing legacy manufacturing equipment; manufacturing requires a lot of coordination across large ecosystems so 3D printing companies are learning to navigate those channels to increase adoption. Let’s have a look at the evolution of 3D printing into a production technology.

Various initiatives like the IDAM (Industrialization and Digitization of Additive Manufacturing for Automotive Series Processes) project have addressed the lack of standardization in AM processes and material properties, making 3D printing even more automated than traditional manufacturing. The IDAM project is expected to result in 50,000 mass-produced automotive parts and 10,000 spare parts being printed per year.

In manufacturing, materials are expected to meet certain qualification standards and 3D printing materials are no exception. A number of organizations and companies are working to create standardized qualification and certification processes for AM equipment. A good example is Stratasys, who collaborated with the National Center for Advanced Materials Performance (NCAMP) under FAA oversight to create a public domain database that includes standardized processes, equipment, and materials for meeting qualification standards. A key requirement for qualification is repeatability as Scott Sevcik, VP of Manufacturing Solutions at Stratasys, explains, “Until you have that (high) level of repeatability, it’s very challenging for a certifier to look at a technology and trust it.”

What were once obstacles for 3D printing are now selling points. Material selection has skyrocketed in the past couple of years and printers are bigger and faster than ever. It’s also becoming more common than not for industrial 3D printers to feature closed-loop systems that actively monitor the dimensions of a part while it’s being printed to ensure it’s within spec; if something is off, the printer will automatically make adjustments to correct the anomaly. High-end 3D printers have really advanced in terms of their capabilities. So rather than outlining why companies aren’t adopting 3D printing for production, we’re going to examine why they are:

The healthcare industry was an early adopter of 3D printing for production needs, partly because they have access to lots of capital and partly because many of their solutions require customization. Over 100,000 titanium hip replacements have been 3D printed and many are still functioning fine after a decade of operation. Hearing aids have been nearly exclusively 3D printed for almost 20 years; tens of thousands of custom hearing aids are printed every year.

Dentists are also heavily reliant on 3D printing these days. 3D printing molds for clear aligners is one of the most dramatic shifts in dentistry. The vast majority of these dental products are produced via a combination of 3D printing and traditional thermoforming, and are perhaps the single highest volume application for 3D printing technologies in the world today. 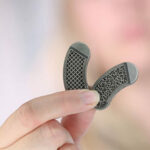 There’s been a huge surge in printing bicycle components, most notably the frames. AREVO plans to 3D print the carbon fiber frame of every Emery ONE e-bike they sell due to the weight reduction enabled by the technology. HEXR is 3D printing custom cycling helmets by 3D scanning each customer’s head to create a perfect fit that’s lighter and safer than a standard foam helmet.

Speaking of helmets, Riddell has partnered with Carbon to do the same thing for football helmets. In a sport where collisions are par for the course, the extra protection provided by the custom fit and internal lattice structure is critical. 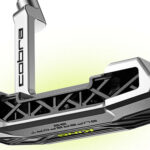 We’ve extensively covered the ongoing adoption of 3D printing in the automobile manufacturing industry, with most manufacturers printing production tools and jigs as well as some end-use parts such as headlight housing. Aviation companies are employing 3D printing to reduce the weight of aircraft, which in turn saves millions of dollars in fuel across fleets. GE Aviation has printed more than 30,000 engine fuel nozzles that improve fuel efficiency, and Boeing has printed everything from instrumentation housings to structural fittings for their planes.

The railway company Deutsche Bahn has now printed some 10,000 parts for over 30 different use cases on their trains. They started with printing simple plastic coat hangers but have moved on to include buffer boxes and wheelset bearing caps that are printed in metal. 3D printing allows them to keep older trains running by fabricating replacement parts that are no longer available. 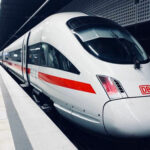 Using 3D printers to fabricate PCBs (printed circuit boards) is another rising trend in manufacturing. PCBs are the hearts (brains?) of electronics; they make our smartphones and blu ray players function. Printing PCBs in-house for prototyping not only speeds up the prototyping process but also provides a high level of IP protection. But PCB printing technology has progressed to the point that it can be used for mass production of small to medium runs as well. 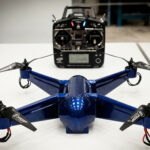 John Handley Bearings teamed up with Bowman to design a new range of split roller bearings. These bearings are an important factor in heavy-duty industrial sectors like mining and quarrying due to its ability to improve efficiency, reduce downtime and increase production.

The cage of these split roller bearings, named ‘Rollertrain’ is designed by Bowman and is entirely 3D printed. The Rollertrain is designed with 3D printing in mind which allowed them to reduce space of the rolling elements compared to traditional “cap and body” cage designs. The additional space around the roller track now incorporates up to 45 percent more rollers than existing bearings. This results in an increased radial capacity of 70 percent and an increased axial capacity by a 1,000 percent. The fitting time for Rollertrain cages is slashed by 50 percent. Additionally it’s worth mentioning that 3D printing is the only manufacturing method capable of bringing this concept to reality in an economically viable way.

There has long been a perception that 3D printing is only suitable for prototyping and one-offs. A misplaced sense that 3D printing is too expensive and 3D printed parts don’t have the right properties have contributed to the idea that additive manufacturing isn’t up to the task of being used as a production technology. When it comes down to small and midsize volumes, 3D printing is set to continue to outpace traditional manufacturing methods.

3D printing has been viewed as ‘disruptive’ for some time. But AM firms are no longer looking to disrupt manufacturing channels. They don’t want to replace the old guard; they want to work with them. AM companies are currently focusing on identifying the best ways that 3D printing can be integrated into existing supply chains. It isn’t necessary to throw out casting and injection molding machines when 3D printers can operate right beside them to create molds and fixtures. CNC machines can still be used to finish parts but they’ll produce less waste if they start with a 3D printed part.

On a related note, the maturity of 3D printing as a production technology can be seen in the current focus on post processing. Post processing is the least glamorous aspect of 3D printing but it’s incredibly important for manufacturing end-use goods. Parts that consumers interact with need to be smooth and uniform, or at the very least not unpleasant to touch. Nearly every major 3D printing company is trying to further automate post processing steps. For plastic parts, that could be a bath in a solution to dissolve supports or smooth surfaces, and for metals it could be a robotic arm that saws off supports and places the part in a furnace for a heat treatment. The rise of 3D printing in production applications closely follows the development of these automated post-processing techniques and machines.

Eventually, more consumer goods like cell phones will also be 3D printed, from the circuit board to the camera lens to the case. Every car will have dozens of printed parts rather than a few cars having one or two printed parts. And so many toys will be printed. Production volumes for AM technology will have to increase a bit, but not by much. 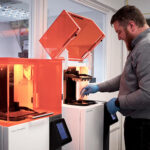 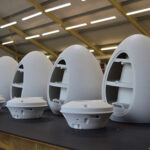