Soundwaves do not perform especially optimal when emanating from a cuboid speaker enclosure. But because flat boxes are easy to make, that has long been the preferred shape of audio speaker enclosures.

But now thanks to the wonders of additive manufacturing and other Industry 4.0 technologies, speaker designers are being given the opportunity to…think out of the box a little bit, bringing a new generation of aesthetically pleasing and sonically rich speaker designs.

With the aid of a 3D Systems SLS printer and some simulation software, UK-based industrial designer company Node has created their HYLIXA speaker design, which features a Helical Transmission Line (HTL), which ostensibly does amazing things to the sound, in particular improving the enjoyment of bass frequencies.

The HTL is a 1.6m long, coiled acoustic waveguide that captures the radiation from the rear of the bass driver. It absorbs the higher frequencies while allowing the bass to pass through, where it emerges in-phase with the bass coming from the front of the driver. Hence, a richer, more sustained bass experience.

Traditional box speakers have issues with resonance also, naturally. A speaker box panel is basically a drum skin. They tend to vibrate a lot. Vibration is good in acoustics, but only as long as the right things are vibrating.

To combat this, Node focused used FEA software to simulate the loads in order to determine the most rigid shape that would reduce unwanted vibrations. They opted for a design that curved the cabinet in two planes, with the continuous wall of the HTL utilized as a radial brace for the structure.

This design was shown in simulations to push the unwanted vibrational frequencies above the typical operating range of the speaker, mirroring how spacecraft engineers use simulation to avoid catastrophic dynamic coupling of components.

Rapid Prototyping through to Production

The prototyping (and production parts) for all this curvy and geometrically complex hardware was performed with a 3D Systems SLS printer, and the DuraForm GF (SLS) plastic feedstock was used. This Duraform variant is a glass-filled engineering polymer that is preferred for its excellent surface finish, and machinability, both being highly desirable traits in the manufacturing of high end speakers. The production version of the speaker actually features the Duraform as the main cabinet and front baffles.

“It has almost a ceramic-like quality to the touch, which helped us both structurally and sonically. As designers, we could freely exploit SLS production to create the internal structure, but also design something that looked as beautiful as it sounds.”

Each speaker measures in at 960mm x 433mm x 278mm which is a little larger than the 381 mm x 330 mm x 460 mm volume of the printer. However, the larger components were printed within that volume, and the smaller cabinet components were printed nestled within the larger part, and the complete unit was assembled later, allowing for efficient use of machine time. Effectively, the bulk of a single speaker can be printed per print job.

If you’d like to read more about the science behind the HYLIXA speakers, then you can head on over to this link to read their white paper. 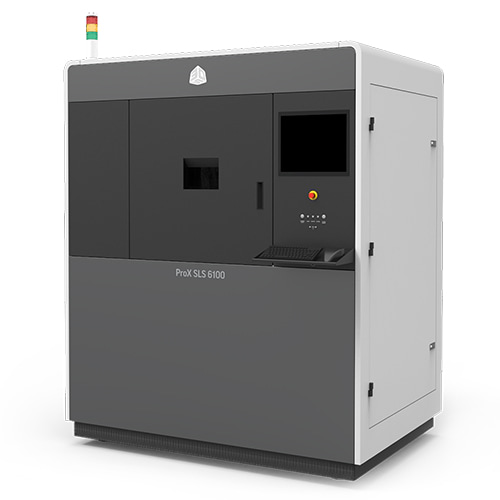 ProX SLS 6100
Production, Prototyping, Tooling
Share:
WhatsApp Twitter Facebook LinkedIn Buffer Reddit E-mail
About the author | Phillip Keane
Phillip is an aerospace engineer from UK. He is a graduate of Coventry University (UK), International Space University (France) and Nanyang Technological University (Singapore), where he studied Advanced Manufacturing at the Singapore Centre for 3D Printing.
We serve cookies on this site to analyze traffic, remember your preferences, and optimize your experience.
Details
Close