Aerospace is gradually looking at new ways to replace metals with plastics, and existing plastics with even better, modern plastics, composites, and manufacturing methods.

Traditionally, aircraft structures have been made from metals, and more recently from composites. Composite manufacturing itself is labor intensive, but modern composites can offer superior performance to both metals and plastics.

A partnership in the Netherlands between industry and the academe has been working on creating large aerospace structures using robotic fiber placement, and they have so far produced a large fuselage skin panel, measuring over 8 metres in length.

The project, named “STUNNING”, aims to utilize modern manufacturing techniques to create a next generation fleet of aircraft with reduced weight (and reduced emissions) while maintaining the same strength and durability of steel and aluminum in their structures.

In addition, the project will reduce the total time of production and maintenance activities associated with aircraft structures.

You can see the component, which has been described as the largest singular plastic part ever made for an aircraft, in the image below.

The acronym “STUNNING”, in case you were wondering, stands for “SmarT mUlti-fuNctionNal and INtegrated thermoplastic fuselaGe”.

The project is coming under the MFFD (Multifunctional Fuselage Demonstration) framework which itself falls under the European Clean Sky 2 program. As you can guess from the name, Clean Sky 2 is focused on developing innovations to reduce emissions from aircraft.

They have created their 8.5 metre long (4m diameter) fuselage skin panel with their automatic fiber placement machine, which lays the pre-preg fibers down robotically, as you can see in the video below. During fiber placement, the fibers are rapidly heated, allowing the thermoplastic resin to bond to the preceding layer. The teams are opting for thermoplastic resin as opposed to thermoset because thermoplastic can be reheated and reformed over and over, ensuring uniformity in bonding.

After the structure is formed, it is placed in an autoclave to even things out a bit and enhance the performance of the structure overall.

Ultimately, the sections will be assembled to form the larger fuselage section, which is the main goal of the MFFD project, which is being overseen by Airbus.

“Another important aspect is that by using thermoplastic material, components at the end of their service life can be recycled”.

You can see a drawing of a larger assembled fuselage barrel section in the image below.

“It is necessary to remove the artificial separation of functions at the aircraft pre-design stage and to plan for a high production rate of aircraft manufacturing, assembly and installation right at the start,” said Paolo Trinchieri, Project Officer at Clean Sky.

“It is not only a question of the thermoplastic materials but also a question of how to design systems that are more efficient in order to increase the rate of aircraft, reduce cost and lower the aircraft weight. This is one of the key factors of the Multifunctional Fuselage Demonstrator project — to devise new solutions to design the fuselage structure and to integrate the systems and the cabin elements in a better way”.

The MFFD project is aiming to have the final barrel ready by the end of 2022.

You can read more about the MFFD project over at this link. 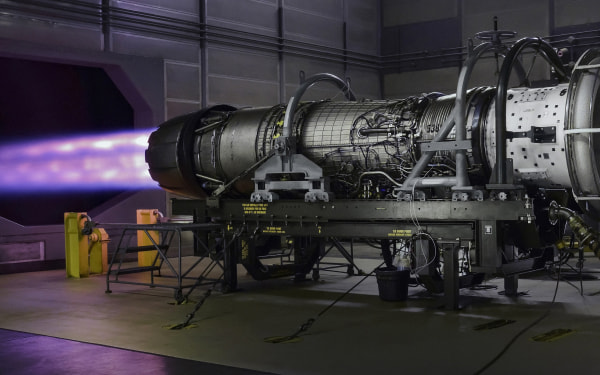 GE gets USAF Airworthiness Cert for Metal AM Critical Part