Bioprinting is much broader than it may seem at first. It deals with many different materials ranging from tissue to stem cells. For this reason, it has diversified into many different subcategories as of late. One of them is the rapidly growing branch of 3D bacterial printing.

Researchers at Delft University of Technology have developed a modified 3D printer that can effectively print micro-organisms. The research team in question used a commercially available 3D printer and retooled it to utilize bioinks. To achieve the desired effects, the researchers changed the extruder to a pipette tip and fitted it with customized tubing. This allowed the printer to maintain the appropriate temperature range necessary for the bacteria to thrive. A secondary tip was also added so that the printer could alternate between different bioinks.

The bioink contains the bacteria suspended in a mixture of a growth medium and an alginate gel. Due to the gel, the mixture solidifies at room temperature when in contact with calcium chloride. Because of this, CaCl is used as a surface as it can keep the bacteria viable for 48 hours.

So far, they have only attempted 3D bacterial printing but future experiments may allow for a wider range of possibilities.

Applications of the Research

The development of bacteria runs parallel to various other possibilities in the field. The research opens up the possibility of producing various other micro-organisms or enzymes. Additionally, it may eventually further our understanding of various viruses and pathogens.

One of the most promising applications is in the field of bespoke material production. The technology can be modified to print onto sheets of graphene-oxide and produce graphene. This is achieved when the bacteria metabolises the oxygen, leaving graphene. The traditional methods of producing graphene require precise temperatures and powerful chemicals. Conversely, this method provides an alternative that could potentially be cheaper and more environmentally friendly.

Graphene has many different applications due to its unique properties. It is very tough, incredibly strong and flexible. Previously, scientists have used it as an electrical conductor. Due to its conductive nature, researchers used graphene to craft a skin-like material with receptors that allow it to transmit a sense of touch. As it is relatively new, companies are still exploring the possibilities of this versatile material. 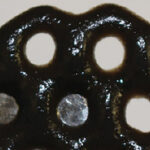 Another use of 3D bacterial printing is in the production of small, yet complex structures. It presents an opportunity to tinker with vitamins, enzymes and other microstructures. This can aid the medical industry in producing antibiotics. It may also present an avenue into revolutionising nano-machines.

This exciting new development is currently in its initial stages. There is much more work to be done but the future of this field looks bright already.