NASA started a competition in 2016 challenging entrants to “create thick, vascularized human organ tissue in an in-vitro environment to advance research and benefit medicine on long-duration missions and on Earth.” Five years later, NASA has announced that two teams have won the first and second prizes, both of which were made up of scientists from the Wake Forest Institute for Regenerative Medicine (WFIRM) in North Carolina.

I cannot overstate what an impressive accomplishment this is. When NASA started this challenge in 2016, we weren’t sure there would be a winner. It will be exceptional to hear about the first artificial organ transplant one day and think this novel NASA challenge might have played a small role in making it happen. Jim Reuter, NASA Associate Administrator for Space Technology

The challenge to keep a cubic centimeter of living tissue alive for 30 days in an in-vitro environment is no small order. Replicating something as complex as perfusion, a process where nutrients and oxygen are delivered to organs while removing metabolic waste, is quite difficult because the process naturally occurs in very tiny, branching blood vessels. Obviously, both winning teams relied on 3D printing to fabricate the delicate channels necessary to successfully mimic perfusion, though they used different gel-like materials to create their liver scaffolds. “The value of an artificial tissue depends entirely on how well it mimics what happens in the body. The requirements are precise and vary from organ to organ, making the task extremely exacting and complex. The research resulting from this NASA challenge represents a benchmark, a well-documented foundation to build the next advance upon,” said Lynn Harper, challenge administrator at NASA’s Ames Research Center.

How To Win A NASA Competition: Use 3D Printing

The team that won first place is called Winston, and for being the first to complete the challenge they’ll receive $300,000 and an invitation to continue their research on the International Space Station U.S. National Laboratory, where exposure to radiation and microgravity will provide loads of new data. The team that came in second is called WFIRM and they’ll be taking home a cool $100,000. Two other teams are still in the running for third place.

These scientists are on the forefront of unlocking the secrets to an infinitely useful technology, both on Earth and in space. Certainly, astronauts and space explorers will need access to bioprinters to replace diseased organs and reduce the healing time of burns and abrasions, but us land lubbers can benefit from having more accurate synthetic models to test pharmaceutical treatments on. So it’s no wonder that Reuter is so optimistic, “NASA brings value to our country in various and sometimes unexpected ways. To see multiple teams succeed in getting a complex 3D tissue composed of multiple human cells to survive and function after a month is amazing and a promising steppingstone for future tissue engineering studies.” 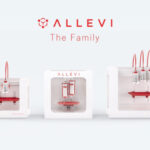