With the rise of XL 3D printing over the past few years, commercial uses are diversifying every day. Larger prints are making their way into manufacturing, construction and so many more industries. Tractus3D is highlighting another use for large format additive manufacturing: channel letters for everyday stores, businesses and exhibitions. Their machines open up a lot of avenues in the production of large, intricate designs for display advertising, set-dressing and lighting.

Channel letters are simply those letters that you see attached to storefronts or other commercial properties, as you can see in the image gallery below. The photo shows a large illuminated sign printed by the company.

German signmakers Styles Werbetechnik is a company who has switched onto the idea of using 3D printing for the manufacture of advertising signs.

In particular, Styles Werbertechnik believes that 3D printed channel letters are the future, and it’s hard to argue with that statement given the benefits compared to traditional letter manufacturing techniques.

Let’s take a look at what a channel letter is exactly, and why AM is perfect for this manufacturing task.

As you can imagine, these signs are pretty big a lot of the time, so while one might be able to do this on a desktop printer, you’re either going to have to settle for very small letters or you’re going to have to print lots of sections to be bonded together, and that’s going to take a very very long time, especially with a typical small diameter nozzle found on a desktop printer.

Styles Werbertechnik knows this, and that’s why they opted for something a little bigger from Dutch manufacturer Tractus3D, who are based in Waardenburg, Netherlands. In particular, the signmakers have invested in a pair of industrial delta-type printers from Tractus3D.

In order to be printing quickly, a large flow rate nozzle is required, and Tractus3D’s machines definitely have that, with a range of nozzles starting at 0.6mm diameter going all the way up to 1.4mm creating layers with a layer resolution of 50-1200 microns available from the 1.4mm nozzle. Print speeds go up to 300mm/s and can deposit up to 110 mm^3/s, meaning those letters will be completed in a fraction of the time compared to if they had been made with the more traditional aluminium and plastic forming processes usually employed in this industry.
The heated beds go up to 110°C and some nozzles can hit 450°C, so these printers are compatible with PLA, PRO1, PET-G, ABS, ASA, Facilan C8, TPU/TPE, Nylon, and PC filaments, and the enclosure helps to keep those higher temperature prints from warping due to unwelcomed drafts.

Traditional manufacturing of these letters was both time consuming, and restricted in terms of geometry. This was especially true when dealing with fancy fonts with serifs.

When manufacturing a channel letter with aluminium for example, the face of the letter would be cut by some form of CNC router or laser cutter (which is fine), but the manufacture of the letter sides would require manual metal forming processes to shape the sides to the letter face. Manufacturing the sides is incredibly time consuming compared to the laser cutting phase. Additionally, if the letter was to be illuminated, it would require additional machining and assembly to fit the lighting components inside.

That is a significant labor saving move! And according to Styles Werbetechnik, it has resulted in 30% reduction of manufacturing costs for their company.

You can see the channel letters being made in the video below.

In summary, thanks to AM, the cost and time involved in making these letters can be reduced fairly significantly, which means that it’s cheaper for manufacturers, and ultimately those savings can be passed onto the customer.

So now everybody can literally have their name up in lights, as the old saying goes.

The T2000 is measuring 2 meters (78.7″) in height and is capable of printing parts measuring 1 meter (39.4”) in height and a diameter of 68 cm (26.7″). Besides its massive build volume, this machine is packed with the latest innovations from Tractus3D. Including a fast extrusion system, the F033L, which ensures print speeds of up to 300 mm/s. 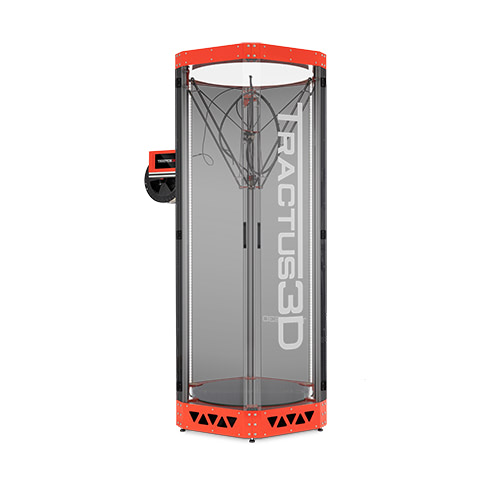 About the author | Phillip Keane
Phillip is an aerospace engineer from UK. He is a graduate of Coventry University (UK), International Space University (France) and Nanyang Technological University (Singapore), where he studied Advanced Manufacturing at the Singapore Centre for 3D Printing. He currently teaches spacecraft engineering, orbital mechanics and project management at University of Philippines Diliman.
We serve cookies on this site to analyze traffic, remember your preferences, and optimize your experience.
Details
Close