Heat transfer occurs via three mechanisms, being conduction (via a solid), convection (via fluids) and radiation (via space).

Electronic components are generally in contact with some other component, hence why conduction is an issue for PCB designers and electrical package designers. The answer to (some of) their woes lies in thermal insulation, which slows or alleviates the flow of heat from one solid body into another.

Aerogels, which are silicate foams with porous structures, are some of the best insulating materials on Earth, but thus far have been limited to larger applications. This is due largely to the brittleness of the material which makes it difficult to machine into smaller pieces. In addition, larger aerogel structures typically feature some kind of fibre reinforcement such as polymer strands, in order to strengthen it (like rebar in concrete, which is also fairly brittle). Again, adding fibres to very small structures is also challenging.

A team of researchers at Empa, ETH Zurich and the Paul Scherrer Institute (Switzerland) has apparently addressed this issue of scalability by 3D printing tiny aerogel structures measuring just 100 microns across, and thus opening the door for small-scale electronic insulation.

The team, who recently published their findings in Nature, has developed the 3D printed aerogel using a printable silica ink, has applied for a patent for the process which not only allows for the printing of stable, small-scale aerogel structures, but structures that are machinable too. They can be milled, drilled and ground just like any other material for precision engineering applications.

We know that aerogel is awesome at insulation, and this mini version is no different with a thermal conductivity of just under 16 mW/(m*K). It performs as a typical aerogel in that regard, so to scale down…simply machine it.

The team did this and tested it on some electronic components to see how the mini structure fared under a test. The thermal images in the picture below show how the small aerogel piece was able to insulate other components from the heat emitted from a voltage controller component.

The image above shows 3 different cases. From left to right the thermal images show heat on an uninsulated component, the same component with an aluminium strip (like a heatsink) and finally, with the small aerogel piece. As you can see, the aerogel is preventing the heat from the component from transferring its heat to the rest of the board and other components.

By varying the flow and solidification properties of the silica ink, the team is able to tune the printed material so that it can form thin wafers and even overhangs.

The team was also able to print a functional Knudsen pump, which is a pump without moving parts.

A Knudsen pump works on the principle of restricted gas transport in a network of nanoscale pores or one-dimensional channels, and works by application of light. The pump is doped with manganese oxide particles and when the dark particles are blasted with light it warms up and passes gas through the system. This is one example of how mini-aerogel structures can be combined to form multi-material structures.

This research could have applications for medical implants where devices are required to be kept under 37 degrees celcius to avoid heat damage to body tissue as well as air purifiers with no moving parts. A very topical product for 2020! 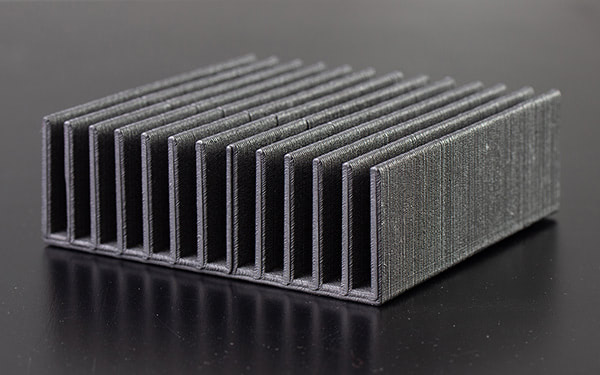