Tunable stiffness is highly desirable in the world of medical implant manufacture.

When 3D printing prosthetics (especially bone replacements) it’s important to get the variable stiffness of the bone correct. Bones are not solid. They have little structures / voids that vary in size and distribution throughout the bone, allowing the bone to flex non-uniformly depending on where the load is applied.

When you put fully dense structure (such as a solid titanium hip-joint) inside a body, it can cause stress shielding as it connects with the existing body structures, and this can result in patient injury, deterioration of the joints over time, and ultimately, a new replacement being needed to replace the old one.

We have seen geometric solutions for this in the form of orthopedic-centred topology optimization and generative design, which aims to replicate those little structures (named “trabeculae”) in an implant. The varying density of the structures along the bone allow flex at certain points of the bone. 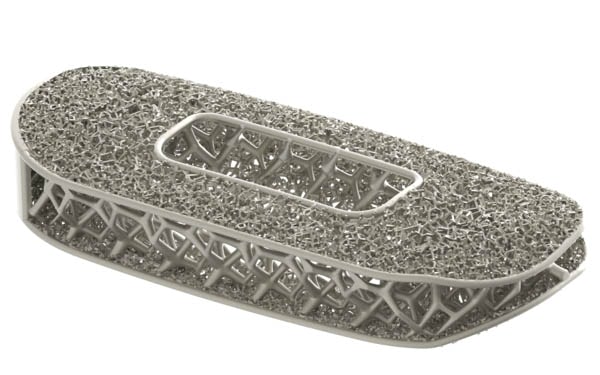 We have not seen much however in the polymer science side, but that may all be about to change thanks to ongoing research from the Texas A&M University and the U.S. Army’s Combat Capabilities Development Command’s Army Research Laboratory, who have managed to print a polymer that can be tuned to a specific stiffness defending on the application.

Synthetic polymers are usually made rubbery by addition of a hardener, which crosslinks the material’s long polymer chains.

“We hijacked the hardener, and attached some molecules that can bond and rebond at a certain temperature,” said Frank Gardea, a researcher at the Army Research Laboratory.

Now when the material is heated up, it will run like a fluid, rather than just melt into a blob like a traditional elastic polymer. Additionally, when the fluid cools, it will harden again, which is a useful property to have when 3D printing. .

“The temperature of the print bed is much cooler than the nozzle, so as it’s being printed, it solidifies because of this chemistry,” said Gardea.

Adding more crosslinks to the polymer chains increases the stiffness of the polymer.

The team also discovered (accidentally) that the new material has the ability to self-heal. When the surfaces of two pieces of the material were placed together, it was observed that the two halves started to rebond to each other. Within 12 hours the 2 parts had become one, with no joins. Typically the application of heat or some chemical would be needed to get the polymers to join together so efficiently. In this case, all they used was time.

“When a defect forms, it breaks that dynamic bond, and when broken, it becomes active. It wants to resolve itself; it looks for a partner to bond to,” said Gardea.

In addition to stiffening the polymer, the team claims that they can make programmable structures with the parts changing shape under application of heat.

For example, they have built a model of a hand using this material, which can change from a clenched fist into a peace sign.

“Ideally, the goal would be to have the material do an infinite amount of shapes. We are right now at two. We are limited because the chemistry only has two states,” said Gardea.

Self healing skins have a wide range of applications ranging from aircraft skin, to artificial limbs.