The CEO of 3D printed rocket engine company Launcher, has posted an interesting image of their new Launcher E-2 engine after it was cut from the build plate with wire EDM.

In case you haven’t heard of Launcher, they are a Brooklyn-based company, and they have manufactured the largest 3D printed liquid cooled copper engine. They plan to attach a bunch of these engines onto their small-satellite launching Rocket-1.

As you can see in the image, the main printed component consists of the combustion chamber, the throat and the nozzle. In addition you can see a whole bunch of flanges and other features for attaching the various cooling and fuel pipework to the engine.

The regenerative-cooled engine body was made on an AMCM GmbH M4K printer, which is a customized EOS M400. Think of AMCM GmbH as a custom hot-rod shop. They customize existing printers, in particular of the EOS variety. And quite rightly, as AMCM are a part of EOS group.

The E-2 follows on from the smaller developmental E-1, but is bigger, designed for larger scale manufacture and has 40x the thrust of its predecessor.

Copper is used as it has favourable thermal conduction capabilities and is fairly strong. Any weight penalties associated with using copper as opposed to some other exotic material are likely offset with weight savings gained from 3D printing it in one piece, as opposed to say, 100 pieces.

It would be interesting to see how they manufacture and install the injectors and injector face.

Here is an image of the fully dressed rocket engine next to the printed part.

How does it get from the near-net shape part fresh out of the printer, to the component ready for assembly? With a lot of extra and processes, that’s how. Modified metal printers are cool, but they’re not at the point where they can print a safe, efficient rocket that is ready to fly right out of the printer. Not yet. They still need to mate with fuel tanks, valves and fittings and whatnot, and these need pretty accurate surface geometry in order to not explode.

The video below from Launcher kindly shows us a lot of these manufacturing steps as it is transformed from near-net shape into fully net-shape part.

As you see in the video, the part is taken from the printer, and the dimensions are checked. It is then placed in an over for vacuum assisted heat treatment. The video doesn’t explain why, but the EOS datasheet for their copper alloy feedstock states that the conductive, thermal and mechanical properties can be further shaped with heat treatment. So it’s probably that.

The part goes through multiple measurements and other processes and ultimately goes into a 5-axis mill where it is milled to the exact specs.

This next pic shows an Inconel coating being applied to one of their 3D printed engine bodies.

The process here seems to be some kind of High Velocity Oxygen Fuel coating method. While this method is not shown in the video, it is on their website. Perhaps it is not being used on the newer engine? Either way…it’s a great pic and highlights one of many ways of applying coatings onto 3D printed metal parts.

If you think the HVOF equipment looks a little like a rocket nozzle, then you are correct in the comparison. The HVOF process mixes oxygen and a fuel into an combustion chamber, where the heat and pressure is forced through the nozzle, exactly like a rocket engine. Except in this case, the metal feedstock powder is introduced into the hot exhaust flow where it is accelerated in a molten state onto the workpiece at velocities in the range of 400-1200 m/s.

In this case, the workpiece is the copper rocket body.

No doubt there are many more steps involved, but their manufacturing process video sure does show a fair amount of information regarding those steps to get the component properly engineered and fit for use.

Obviously the tradeoffs and benefits are worth it, as the company will be tested this summer thanks to an United States Air Force PHASE II SBIR contract.

And naturally we will keep you up to date on any updates. It’s an interesting project, and a very pretty looking engine. 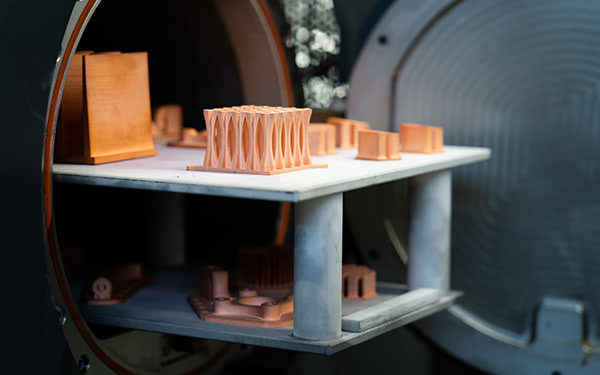