Carbon is making waves this week with its launch of SpeedCell. The SpeedCell system looks to be an all-encompassing CLIP package. Carbon first came to prominence after introducing the Continuous Liquid Interface Production technology. Since then, they’ve procured major contracts with companies like Ford, General Electric and BMW.

Carbon markets the SpeedCell as an “Additive Manufacturing Solution”. This means that it is an integrated package that includes hardware, software, materials, service, and support. As a whole, companies can subscribe to a full package and pay a certain amount per year for full support from Carbon.

The company is offering tailor-made packages depending on the needs of the client. The Carbon M2 package costs about $50,000 per year. For an additional $10,000, Carbon will include the Smart Part Washer.

All packages include Finite Element and the CLIP physics engine. The Finite Elements Analysis tool is a cloud-based system to aid customers in designing their prints. The CLIP physics engine optimizes each print allowing for greater speed and accuracy. Additionally, all packages also include customer support and consulting with experts at Carbon’s customer support service. Carbon has also stated that updates will be made regularly and automatically.

Carbon has many strategic partners. One of them is General Electric, a company that made the news for various rumoured buy-outs. Most recent of these rumours was from January, in grapevine gossip of a buyout of 3D Systems. The market promptly responded to these rumours by sending up stocks for 3D Systems by 24%.

As of yet, it is unknown whether those rumours were unfounded or whether the deal fell through. What we do know is that GE has an engagement with Carbon. Moreover, it looks to be a very beneficial joint venture that both companies will make gains from.

GE has always maintained a keen interest in the 3D printing industry. Previously, back in 2016, the company purchased 2 different 3D printing firms. In separate acquisitions, GE procured deals for Sweden’s Arcam AB and Germany’s SLM Solutions Group AG. Therefore, many have considered it a long established fact that GE is planning to move forward with 3D printing innovations. So far, it appears that they are hedging their bets in multiple directions. 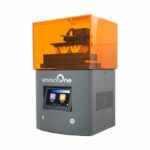