Bioprinting is making gains all throughout the world of academia. Companies active in this field receive massive research funding and one of the most lucrative research fields is that of developing biodegradable materials. Researchers at MIT appear to have made a breakthrough on this front.

Researchers at the prestigious American university have recently developed a means for printing cellulose. This is a major breakthrough because cellulose is a major component of paper and wood. Sebastian Pattinson and A. John Hart co-authored the research. They have stated that the benefits of cellulose printing are that “it’s inexpensive, it’s biorenewable, biodegradable, and also very chemically versatile.” 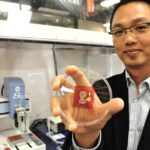 While many researchers have previously attempted to print cellulose, they all faced major hurdles. Due to its structure, cellulose is not easy to heat without exasperating its base components. Upon heating, cellulose decomposes and thus becomes unusable. Another issue previous researchers ran into was that the material suffered from a high level of viscosity. As a result, extruders were not capable of excreting the material properly.

The researchers instead opted to use a material called cellulose acetate. It has a different chemical structure and dissolves in acetone. After dissolving it can then be extruded with ease. Cellulose acetate is widely available and comparable in price to plastic filaments. Another benefit is that printing it can be exponentially faster than traditional heating-based extruders. This is due to the fact that it uses acetone to dissolve the filament rather than traditional heating or melting.

The figure below shows tweezers made from the cellulose acetate:

Front Cover Picture Courtesy of MIT, Sebastian Pattinson and A. John Hart (authors of the Study).