Researchers from Universiti Teknologi Malaysia and Newcastle University in Singapore have been experimenting with the addition of pineapple leaf fibers to PLA, to develop new environmentally friendly bioplastics.

The research was successful with the resulting pineapple reinforced PLA composite filament demonstrating improvements across a number of mechanical properties and also a reduction in density. This means that the addition of powdered pineapple fibers toa PLA matrix can actually increase the strength to weight ratio (specific strength) of such printed specimens. Additionally, the samples demonstrated enhanced crystalline properties, chemical bonding and thermal properties.

The pineapple leaves were procured from Thailand, cut into smaller pieces and then manually pulverized into powder form by use of pestle and mortar.

The powdered leaf matter underwent surface modification via the addition of sodium hydroxide solution (lye), which is a corrosive alkali. After soaking in the lye solution for an hour, the PALFs were removed and washed to remove the excess alkali solution. The treated PALFs were then neutralized with acetic acid (vinegar to you and me), before undergoing drying in an oven. The result was the formation of the APALF, and the dried APALF was powdered further.

After the PALF and APALF powders were created they were mixed with an unmodified, off-the-shelf PLA pellet feedstock, namely Natureworks IngeoTM Biopolymer 4043D PLA, before being fed into a filament extruder.

After the extrusion process, the pineapple/PLA composite was ready for printing into test specimens, such as dog bone coupons. Various filaments of the APALF/PLA and PALF/PLA composites were produced containing different amounts of the plant matter by percentage of weight ranging from 0% to 5% PALF/APALF content, with the remainder being unmodified PLA.

You can see examples of the composite filament and printed test coupons in the graphic below.

The results were as follows.

It was the same story for elongation at break and fracture toughness, which were both optimally improved by the addition of 3% of the powdered and treated plant matter.

Conclusively, the researchers determined that 3% was the magic number where it came to the addition of PALF or APALF to the PLA.

Further tests were performed on the superior mechanical specimens to determine additional parameters. It was shown for example that the 3% loaded APALF specimen showed higher thermal stability and better flame resistance. Additionally it was shown that specimens with PALF had higher ductility, due to the presence of hemicellulose and lignin, which was otherwise removed during the treatment in the lye solution.

The results showed overall that by using the optimum combination of PALF or APALF, it is possible to create pineapple fiber-based biodegradable packing materials.

You can read the full paper and detailed results and conclusions over at this link. 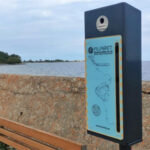