The new system is capable of printing objects up to 120ft long and 24ft wide at speeds of up to 12x faster than the previous systems. Yes, that means rockets!

This one also differs from previous iterations in one notable way – it prints rockets horizontally.

You can see the 4th gen Stargate in the image below.

The new printer platform will support the scaled up production of Relativity Space’s Terran-R rocket, which is the company’s first fully reusable, 3D printed rocket, which will be capable of hoisting 20,000 tons into low Earth orbit (LEO).

The new robotic printer achieves its higher print speed thanks in part to the new multi-wire print head into which multiple metal feedstock wires are fed into the head at once, enabling higher deposition rates than ever before. The company has also developed custom software and will employ machine learning to improve the reliability of the proces, and complexity of the parts. The company states that the new system will reduce the part count significantly also.

“The lighter a product is, the better it performs, and when 3D printing that product, it’s also faster and more cost-effective to produce with each successive improvement. The compounding rate of progress is high, and we are still in the early days of what printing can achieve, “ said Tim Ellis, co-founder and CEO of Relativity Space.

“We see 3D printing as an automation technology that has the power to change the pace of innovation in manufacturing, which is why we’ve invested in building our own proprietary tech stack from day one. Stargate printers are designed to unlock rapid iteration, which opens up opportunities for innovation in large-scale manufacturing products.”

“In its short history, Relativity has made great strides in evolving its core 3D printing technology, but Stargate 4th Generation printers are our most innovative leap yet,” said Scott Van Vliet, SVP of Software Engineering.

“We’re fundamentally changing the way our factories are designed and operating, and by flipping the script and going horizontal, we’re radically increasing our capacity for scale. Being a software-driven manufacturing company allows us to achieve unique product features, such as integrated pad-ups and domes, with radical flexibility.”

So far the company Relativity has scored $1.2B+ in customer contracts for the Terran R, including a commercial mission to Mars with Impulse Space. 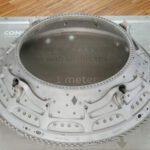