Rock Island Arsenal, Illinois, will soon have the largest metal 3D printer in the world installed at the military base. The media were recently invited to an event to celebrate the upcoming installation of the machine at the Rock Island Arsenal Joint Manufacturing & Technology Center.

It will be used primarily for the fabrication of big components for military ground vehicles. The system, named the “Jointless Hull Large Format Tool” will be able to print large components in a variety of metals measuring up to 30 ft in length, 20 ft in width, and 12 ft in height.

As you can guess by the name, it will be printing large jointless components which would traditionally require assembly and welding/fastening together. The new system will allow vehicular body components to be fabricated in fewer parts, in faster time, and with less waste materials.

You can see a 3D model of the machine in the picture below.

The printer will be manufactured by ASTRO America in collaboration with Ingersoll Machine Tool in nearby Rockford.

ASTRO America (The Applied Science and Technology Research Organization of America) was formed in 2018, and research institute and think tank, dedicated to advancing the public interest through manufacturing technology and policy. They were selected to develop and deliver the big metal printer by the US Army.

Ingersoll have been tasked with the fabrication of the machine using their vast experience in machine manufacturing.

“It’s creating an opportunity for us to build things that we’ve never been able to build before,” said Maj. Gen. Darren Werner, Commanding, U.S. Army Tank-automotive and Armaments Command.

“We’re moving into a space where we can build things in a three-dimensional computer-aided world and then bring it to full maturity as an actual product on the ground.”

One of the key motivations for the design of the machine is the ability to replenish the undersides of vehicles that have been damaged by explosive devices. It has been estimated that 73 percent of all vehicle losses in the Vietnam War were incurred due to enemy usage of anti-personnel and anti-tank mines. This problem persists today with roadside IEDs being a constant threat.

AS a result, vehicle undersides are built incredibly thick and strong, but traditional manufacturing methods such as forging, forming, and welding have been unsuitable for applications such as this due to weld porosity, and reduced geometric freedom.

The US military has identified large format additive manufacturing as a solution to these issues, and so the Jointless Hull Large Format Tool was commissioned.

“We have gone from the factory floor to the foxhole in every single war and conflict that [America has ]been involved with going back to the Civil War. This puts us in the military of the future.”

The Jointless Hull Large Format Tool will be tested at the Ingersoll Machine Tool factory in Rockford in December 2022 before being dismantled and reassembled at the arsenal, where it is expected to become operational by May 2023. 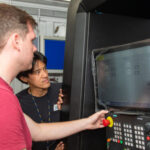