Traditional rockets are incredibly inefficient for a number of reasons, not least due to the fact that they are mostly disposable.

But reusability aside, another reason that rockets are inefficient is the fixed geometry of the bell nozzle.

Efficient rocket thrust is dependent on the exhaust gas going in the correct direction (opposite to direction of travel, ideally).

A bell shaped rocket nozzle (also called a convergent/divergent, or “con-di” nozzle) shapes the exhaust gasses so they flow out in more or less a straight vector. But as it exits the nozzle, the flow encounters the atmosphere, which also shapes the flow.

Of course, it would be lovely to have some kind of morphing nozzle that varies its geometry as the altitude changes, but such a device would carry a huge mass penalty, which is not good for rockets. Some rockets use a nozzle extension to offer some compensation, however this also carries a huge mass penalty.

Another solution is to use an aerospike engine, as seen in the picture above. The aerospike engine, due to its operating principles, performs optimally across a range of altitudes and can increase efficiency significantly.

These engines have existed in conceptual form or as test items for decades, but the problem has been with the cooling requirements for the middle spike. Additive manufacturing is now enabling the cooling channels to be manufactured with relative ease.

Hyperganic has not only made the world’s largest printed aerospike (measuring 80cm tall) but they have done so without any manual CAD inputs at all.

Apparently their algorithmic design software will churn out aerospike designs all day long based on a few inputs, and will generate complex designs that cover all aspects of the engine including spike geometry, cooling channel paths and injector parameters.

This is pretty handy, because as anyone who has attempted to design a rocket engine can confirm, most of these parameters are dynamically linked in some way, so changing one thing totally screws with everything else. Hence a parametric approach is preferred, and an AI assisted or algorithmic approach is even better for iteration.

The Hyperganic aerospike is printed in what appears to be copper, or maybe even mixed metals, as we have seen before.

So the big question remains…

Does it actually work?

Printing fancy looking motors is one thing, but the proof as always is in the pudding.

The pudding in this case will be full motor tests, and we await these results eagerly! 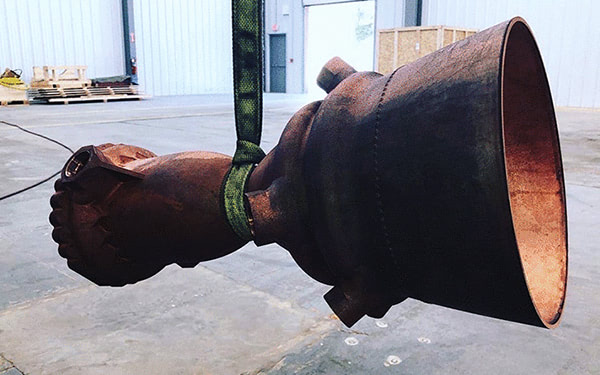