It was a nose-mounted smart product that offered the moon and delivered ridicule and paranoia.

And do you remember the expectations versus the reality? We were promised a futuristic HUD with the ability to pipe information from the interweb directly into our eyes…

But in reality, it seemed to be used mostly for obnoxiously recording every face-to-face human interaction the wearer was involved with in their daily existence.

For that reason, the term “glasshole” entered the lexicon, and shortly afterwards, the Google Glass project just kinda disappeared…up its own glass, much to the lament of tech-savvy early-adopter hipsters all around the world.

Well, that’s not strictly true. The prototype/dev Explorer edition just faded away and was eventually replaced by the Enterprise Edition, which basically nobody cared about either.

When was the last time you saw someone wearing a Google Glass? Exactly.
It was just too weird for public consumption.

If you were one of those folks who feels that wearable face-tech disappeared too soon, then lament no more because the next generation of smart glasses could be winging their way onto your faces very soon thanks to 3D printed lens company Luxexcel.

Luxexcel, who are headquartered in Eindhoven, Netherlands, have been 3D printing lenses since 2009 and are patent holders to some of the main technologies required for 3D printing lenses. These patents make up the core of their VisionPlatform, which includes a 3D printer, a collection of custom resins for printing lenses and the proprietary software (VisionMaster) for designing and printing lenses, of both smart and traditional varieties. 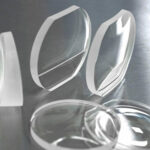 How does it work?

Having worked as a lens maker, this writer has some experience in this field, and I have the scars on my fingers a decade later to prove it. Ground lens edges are SHARP. Like razor sharp.

In a nutshell, a lens manufacturer will typically take a plastic/glass lens blank from a variety of optical options based on customer requirements. The blank looks like a transparent hockey puck.

It is then loaded into a grinding machine with the tooling, which is shaped to provide the correct curvature to the front and back of the lens. The grinding machine is pumped full of milky abrasive fluid, and you just sit back and wait a while until the abrasive covered tools do their job.

It then goes onto another machine and is polished in a similar way.

The ground/polished lens is removed and cut down to shape so it fits the spectacle frame before going through some QC process where the refractive index of the lens is measured before being fitted into customers’ spectacle frames.

By 3D printing the lenses, you can cut out all of that black selection process, and the grinding and polishing, and simply 3D print the lens into its final form.

No need for polishing and grinding machines. No need for a storeroom full of blanks. You can see the value already, right? Reduced processing steps equals reduced machine costs, and reduced staff costs too.

And as traditional lens grinding is a subtractive process, it can waste up to 80% of the material in manufacturing. With AM, that wastage is reduced significantly.

How is it different from Google Glass?

While the Google Glass had a single little screen positioned just above the eye for you to stare into, the Luxexcel models have the screen inside the lens itself.

And there are two lenses, just like real glasses.

The lens itself can be designed to whatever your prescription demands. The main difference is of course that Luxexcel is a dedicated optical lens company as opposed to Google, who aren’t.

Consequently this technology feels like it has been designed from the ground up to actually look like glasses (and function like them) rather than the Google product which looks like someone has glued a Pez dispenser onto a frame.

The result is a pair of AR glasses that actually look like glasses, with larger screen real estate than Google’s weird effort. And because the electronics are embedded into the lens, there are some weight reduction benefits also.

Let’s just be clear: Luxexcel are primarily a lens manufacturer rather than a smart-glasses product maker. They are largely designing smart lenses for other companies to put into their own products.

For example, a couple of years ago they provided lenses for the Vuzix Blade AR glasses.

Will this help bring about a true AR killer app? Or will we be doomed to wearing the likes of Magic Leap and Microsoft HoloLens for our AR jollies?

Let’s hope it is the former. 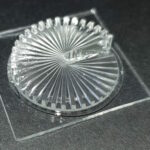