3D printed bridges are apparently like buses in the sense that you wait a lifetime for one to materialize, and then two show up at once.

And that is exactly what has happened this week as both China and the Netherlands have installed 3D printed bridges and revealed them to the public.

The MX3D bridge has been a long time in the making, having been teased to the public during various stages of design and manufacture over the last few years.

It has been produced by use of a WAAM (Wire Arc Additive Manufacturing), which is basically a robot, arc welding layers in three dimensional space.

The steel pedestrian bridge, spanning 12 metres and capable of carrying a load of 20 tons, has finally been installed at its new home at the Oudezijds Achterburgwal canal in central Amsterdam.

And this isn’t just any old dumb bridge: it’s a smart bridge that has been designed with the full brunt of available Industry 4.0 technologies ranging from generative design, AM, IoT connectivity and its own Digital Twin!

The end result is an organically shaped bridge that tells you how it’s feeling (structurally speaking) via its sensor network and via its Digital Twin interface.

As the old phrase goes, it takes a village to raise a child, and in this case, the village consists of designer Joris Laarman Lab, Autodesk, ABB robotics, Arup, and many more.

You’ll be able to stroll across this bridge when it is finally opened around the end of July.

The hitherto unnamed China bridge, which was unveiled in Shanghai this week, is a different animal to the MX3D bridge altogether.

For a start, it’s not made of solid steel, meaning the bridge weighs in at a comparatively slender 850kg.

It is made from 9 retractile segments which allows the bridge to roll up into a wheel.

You can see the bridge doing its retractile thing in the video below, just for clarification.

The 36 triangular panels you can see on the sides of the bridge have all been 3D printed, and feature individual designs giving the effect of rippling water on the bridge sides.
This bridge is also a little shorter than the Dutch bridge, measuring 9 metres in length.

The bridge can be unfurled (and re-furled) by the operator in under a minute by use of a Bluetooth enabled controller and can, according to PRC state-mouthpiece The Global Times, support 20 people at a time.

The website also reports that the bridge is made from “carbonate polyester” (sic) which has been sourced from Germany. We assume that means polycarbonate.

Sadly no further details regarding the designer or manufacturer have been revealed, save the official opening date, which is scheduled for the end of July.

So if you happen to be in Shanghai around the end of this month, then you may wish to drop in at the Wisdom Bay where the bridge has been installed. 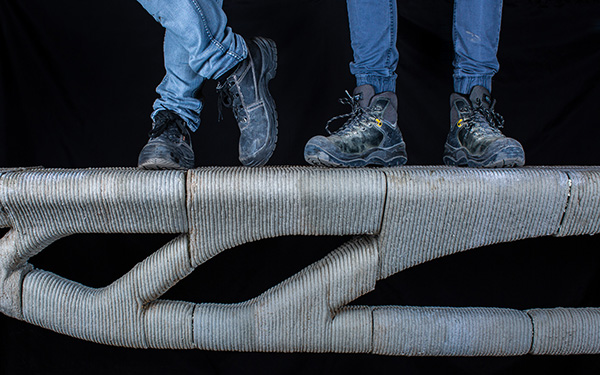