3D printers use lasers in a diverse range of ways, the most common uses have been in sintering or melting. This has naturally lent itself to metal printing due to the high temperatures it can produce. Adding to the portfolio of laser technologies, we now have Laser Metal Deposition as used in ITRI’s LMD 3D printer. 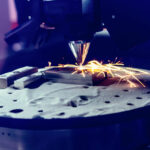 Developed by the Industrial Technology Research Institute, LMD is in many ways similar to melting or sintering tech. The technology deposits powders and uses lasers to heat them into shape onto a platform. The core difference appear upon closer inspection. For example, this method utilises a constant powder stream being melted. It uses twin streams of powders and another pair of shaping gas streams in the procedure.

So far the technology works on iron, cobalt-based, nickel-based alloys, tungsten carbide and other metal powder coated metal. It is useful for strengthening, repair, regeneration or direct manufacturing. The LMD 3D also uses various intensities and laser types depending on what suits the materials best. As a result it can work with such a diverse range of metals.

The LMD 3D has a build size of 9.8 x 9.8 x 11.8 inches. It’s energy usage is 6000 Watts. The hardware and parts were developed by the company themselves. The machine’s software was made in collaboration with Belgium-based Materialise. Another interesting fact about the device is that it is a 5-axis 3D printer, allowing for a wider range of possible motion during prints. It uses domestic robot axis CNC machines.

The video below conveys the main attributes of the technique.

“Industrial Technology Research Institute (ITRI) is a nonprofit R&D organization engaging in applied research and technical services, aiming to innovate a better future. Founded in 1973, ITRI has been dedicated to helping industries stay competitive and sustainable.”

The company is based in Taiwan. The Taiwanese government has helped fund them. Taiwan has been seeing a great surge in 3D printing tech developments. It is among the highest investors in the Asian region along with China.