We have taken a look at how the private sector are using additive manufacturing to build rocket engines in this previous article. In that example, the engineers use powder bed fusion for printing their small (30cm diameter) dual-alloy rocket nozzles.

NASA on the other hand have been experimenting not only with powder bed fusion but also with blown powder directed energy deposition, as part of their Rapid Analysis and Manufacturing Propulsion Technology (RAMPT) project.

The RAMPT project is funded by NASA’s Game Changing Development program and includes partners from across the agency such as Marshall Space Flight Center, Glenn Research Center and Ames Research Center as well as from industry and academia.

Previously the NASA team had experimented with powder bed fusion for manufacturing their dual-alloy, composite overwrapped engine assemblies at a smaller scale, but thanks to Direct Energy Deposition (DED) they have been able to scale up the size of their builds having printed a rocket engine measuring 40 inches in diameter and standing 38 inches tall, with fully integrated cooling channels.

Traditionally, a rocket assembly of this complexity would take a year to manufacture via normal welding methods. But by integrating the individual parts into one print, they were able to reduce the build time to just 30 days.

And Boeing thinks that they may be able to go even bigger than 40 inches, suggesting that this method could be used to print the Space Launch System engines.

Blown powder directed energy deposition is also known as Direct Energy Deposition (DED), and works by blasting powder out of a nozzle with an inert gas, directly into the path of a laser which is mounted in the same printer head as the gas/powder nozzles. The resulting meltpool is steered along the toolpath by the printer’s CNC system, and a part is formed layerwise.

The image below shows the arrangement of powder/gas feed tubes arranged around the laser and nozzle.

As seen in the cutaway image below, the powders are fired in a steam of gas at the previously deposited matter, where the powder streams are met with a laser and fuses the powder particles to the target.

“This technology advancement is significant, as it allows us to produce the most difficult and expensive rocket engine parts for a lower price tag than in the past,” said Drew Hope, manager of NASA’s Game Changing Development Program.

“It will allow companies within and outside of the aerospace industry to do the same and apply this manufacturing technology to the medical, transportation, and infrastructure industries”, added Hope.

One such company is Boeing, who are undoubtedly excited at the prospect of cutting their manufacturing costs on the already over budget Space Launch System project.

“Producing channel wall nozzles and other components using this new type of additive manufacturing would enable us to make the SLS (Space Launch System) engines at the scale required with a reduced schedule and reduced cost,” said Johnny Heflin, Liquid Engines Office manager for the Space Launch System program.

RAMPT and the Space Launch System team are currently investigating development of a 5 ft diameter variant for qualification testing, which presumably will serve as a roadmap to a possible replacement for the RL-10 engines on the upper stages (which measure around 7ft in diameter). 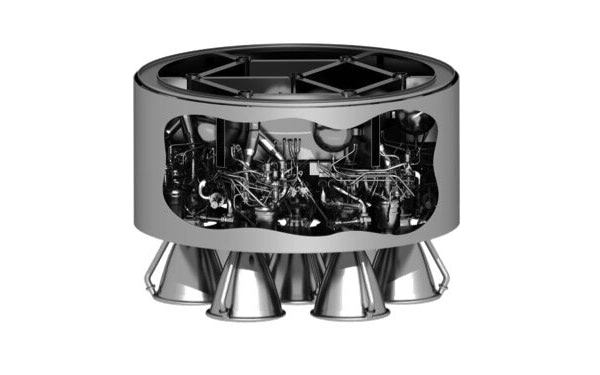