In a paper titled “3D Printable Hydroponics: A Digital Fabrication Pipeline for Soilless Plant Cultivation,” Dr. Yuichiro Takeuchi of Sony Computer Science Laboratories Inc outlines his experiment on 3D printing plant substrates for hydroponic growing systems. Various hydroponic components like nozzles and baskets have already been 3D printed by researchers and DIYers, but nobody had tackled the growing substrate up until now.

Hydroponics is the growing of plants without the use of soil. Water and nutrients are delivered to the plants via drip or pool systems powered by pumps. The benefits of hydroponics include larger harvests, more control over nutrient and pH levels, and less water usage because whatever isn’t absorbed by the roots can be recycled through the system. Obviously, hydroponics are especially useful in areas where good soil is hard to find or expensive to acquire. Vertical growing doesn’t work well with soil, either, which is becoming a popular feature of high-rises.

While soil can be replaced, the necessary traits of soil that plants crave must also be replicated: water retention, oxygen permeability, and a support structure that can hold the plant securely without constricting root growth. Ideal growing substrates include clay pebbles, vermiculite, perlite, coco coir, sponges, and rock wool, the first four of which must be held in a container as they are loose particles. Dr. Takeuchi considered all of these traits before creating his 3D printed substrate, and he tested several plastics before finding one that performed well.

He tested ABS, PLA, TPU (flexible), and SBS, and only SBS had positive results, likely due to its elasticity. With the the stiffer plastics, the plants’ roots were restricted and the plants died. To achieve the porosity that would allow root growth, he made a composite filament made up of 70% SBS and 30% PVA, a material often used for 3D printing support structures because it dissolves in water. By rinsing the printed substrates in water, they become porous.

A variety of plants were successfully grown in the printed substrates, such as arugula, lettuce, basil, sunflower, and tomato. A yield test where six sets of lettuce were grown in porous SBS, sponge, and rock wool substrates indicated that SBS can produce yields that are in line with the traditional substrates, though one of the SBS plants died while none of the others did. Though it was not intended, some mold and algae grew on the SBS substrates; this reveals that it may be possible to also grow lichens and mushrooms on 3D printed substrates.

Those results are promising because SBS was not designed for growing plants. With some materials research, it seems likely that a more ideal material or printing method could be developed. Indoor agriculture and hydroponics are growing quickly as populations become more urban and as more extreme weather events become more common, so streamlining the design, installation, and operation of such systems will prove fortuitous. As such, Dr. Takeuchi also integrated a seed planting head into his 3D printer to demonstrate automated planting.

This concept would scale well with large-scale 3D printers, and substrates could be printed with geometries that are ideal for the specific plants being grown. Irrigation tubes and maintenance access points could also be incorporated into the substrate foundations to further streamline systems. Such 3D printed substrates could even be used to grow custom-shaped fruits and living sculptures. 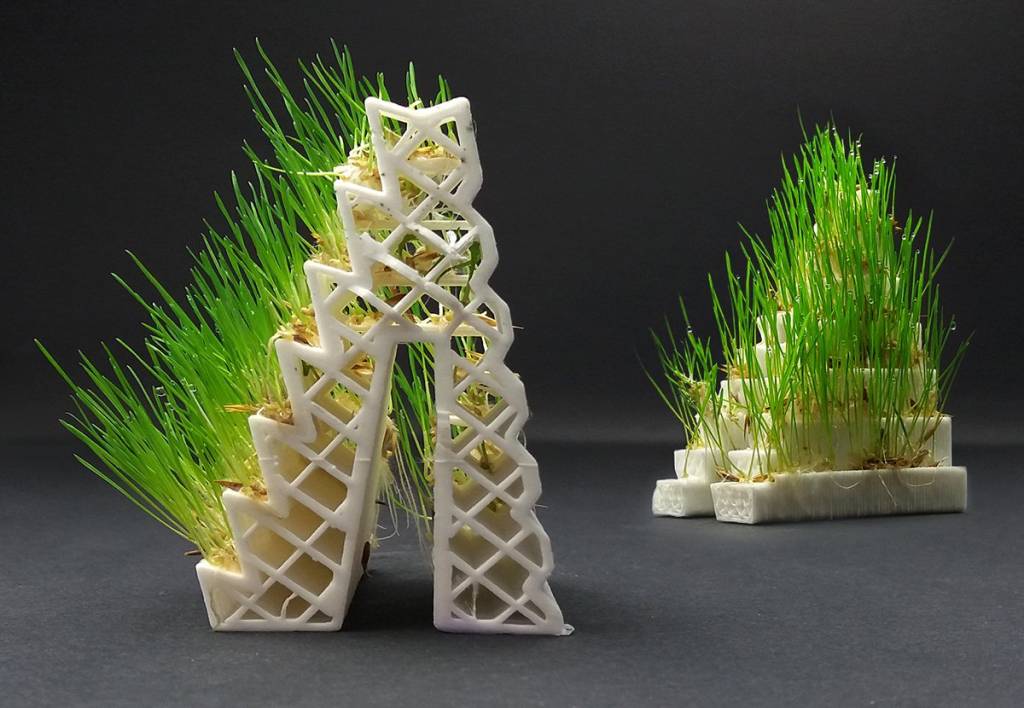