While our loyal readers are fully aware of the near ubiquitous adoption of AM throughout the automotive manufacturing industry, the shift has gone mostly unnoticed by car and truck buyers. They don’t need to know that the drive housing for the electric motors is printed, or the seats, or the tooling to make the tires because there are so many other more relevant facts to know about a car when considering to purchase one. 3D printing is certainly fascinating but manufacturing is usually a behind-the-scenes affair. That is, until Bugatti rolls onto the track. Bugatti can always be counted on to bring everyone’s attention to 3D printing, right after we stop drooling all over the car. Here’s a breakdown of all the 3D printed components in the 1,825hp Bolide.

As a “track-only concept,” the (theoretical) 310+ mph Bolide is not intended for production or purchase (yet); it’s mostly meant to demonstrate the limits of what can be done, both from a design and technological standpoint. 27-year old supercar designer Frank Stephenson dreamed up the Bolide as “the ultimate statement.” I’d say he hit the mark. The supercar that was seemingly ripped out of a sci-fi movie is powered by VW’s 8-liter quad-turbo W16. The Bolide is the lightest car with that engine (at only 2,734 pounds) due in large part to 3D printing.

Henrik Hoppe leads the SLM (selective laser melting) team at Bugatti’s new technologies department, and he was involved in the spectacular demonstration of the printed titanium brake caliper for the Chiron. Now he’s applying the lessons learned from those tests to find the ideal design and printing parameters for serial production. In order to reduce weight (and costs incidentally), the team printed parts in hollow titanium with very thin walls. 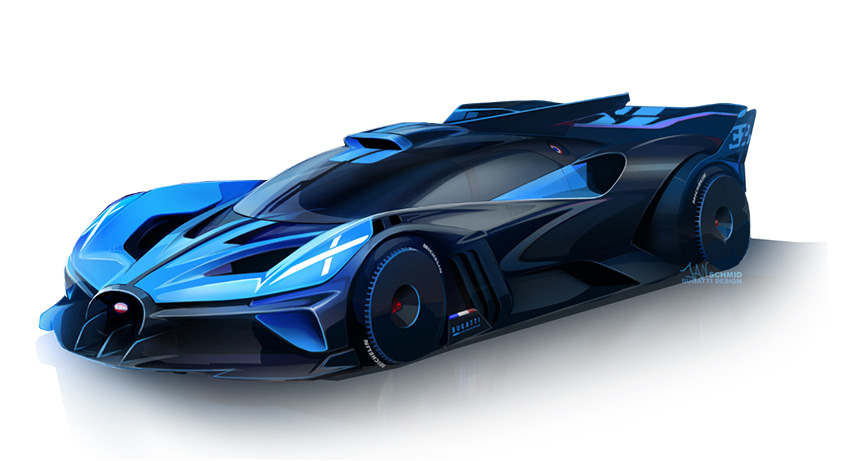 There are very likely more printed components that Bugatti hasn’t revealed yet, but it’s an impressive list already. Bugatti does a fantastic job of showing how AM technology, and a bit of creativity, can drastically improve form and function simultaneously.

3D Print Your Own Car Parts