Updated on October 10, 2016 – Taekyeom received advice on his clay extruder, PVC pipe is not a safe material because PVC can crack, or even shatter. Cooper or stainless steel will be good material. DO NOT use PVC piping system for use in compressed air.

3D printed ceramics are relatively less popular in 3D printing, compared to plastic and metals. With DIY open source 3D printing however, artists and makers are able to build their own 3D printer based on RepRap principals. Taekyeom Lee, Assistant Professor of Graphic Design at Appalachian State University, has built his own ceramics 3D printer with clay extruder. He was able to create a ceramic typographic sculpture with this machine. 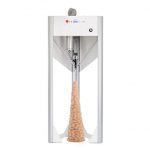 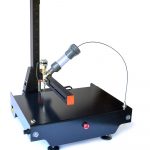 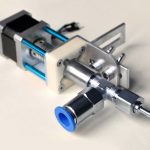 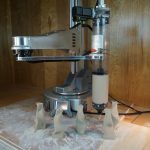 Taekyeom’s project branched out from his academic research interest. His research explores unconventional methods of creating three-dimensional type with materials and techniques unique to type design — such as ceramics and desktop 3D printing. This research reflects on the development of the digital fabrication and the unconventional typographic practices in the new digital age. He has made three-dimensional ceramic type as a series of typographic explorations to strive challenge and seek a new way to create tangible type in the three-dimensional space. About a year ago, a new idea came to mind. Taekyeom thought of combining typography, ceramic and 3D printing. “Especially, desktop 3D printing drew my attention because I do not need the space and equipment for a clay studio. I can make more intricate and variety of modular designs with the new tool,” he explains. 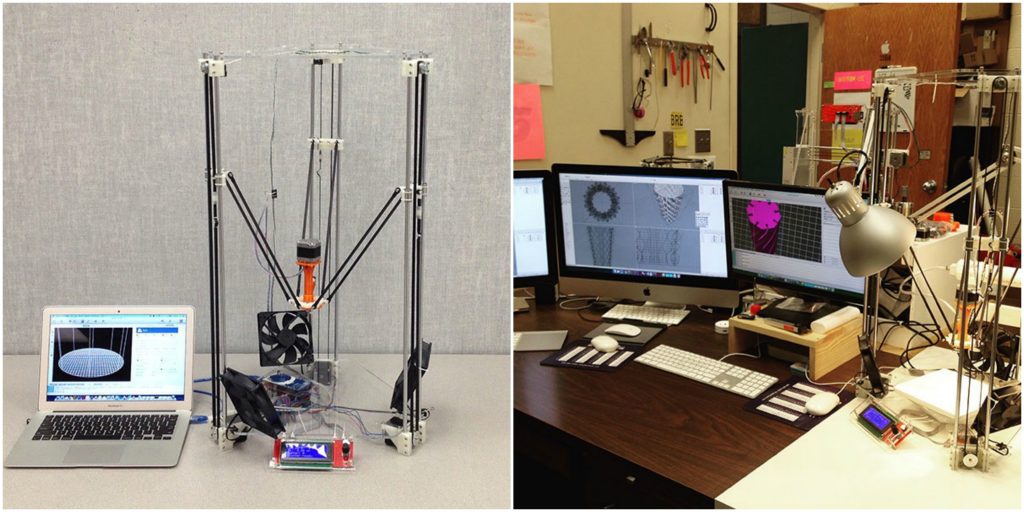 His ceramic 3D printer was built based on a delta style 3D printer. In the summer of 2015, he purchased a DIY 3D printer kit. He played and tested with the open source 3D printers in order to figure out what he can do with this new tool and technology. For him, the most exciting feature of the DIY 3D printer is that he can build his own tool and customize it to make something new. Because there was no ceramic 3D printer available for him, he needed to make his own. “Simply put, I made my own tools to make something I wasn’t able to make with my own hands,” he says.

Since the first printer was not able to print large ceramic type and objects, he wanted to build a scaled up version to print larger ceramic object. Since he was new to the world of 3D printing, it was not an easy task to build this new version. He had to go through a trial-and- error phase until he managed to get a workable machine. “I made a prototype with an idea, tested the prototype, documented the result, and made another prototype. Much like other designers who highly value the power of the design process. I learn something from every failure and success.”

Once the 3D printer was built, he designed a new clay extruder. His first attempt was using glue dispensers, they weren’t the best solution. Thus he made one with PVC pipe. “The trickiest part was making it airtight and have it resist up to 80 psi” he says. After three prototypes using PVC pipe, the 4th version was working properly. Although clay extruder was reliable, it was still difficult to print clay. It required multiple test prints to figure out the right psi and slicing configurations. “Although early works were not great, I was very excited to make new ceramic objects.”

As the pneumatic clay extruder could not print more complex objects, Taekyeom designed a new clay extruder with an auger screw. After some research, he found out that a few glue dispensing companies and some specialists are using auger valve to control the paste extrusion. “for this I used my 3D printer for prototyping. I designed auger screws and housing on Rhino and printed them out. I have tested 56 different screws and 8 housings to make the custom clay extruder,” he explained. 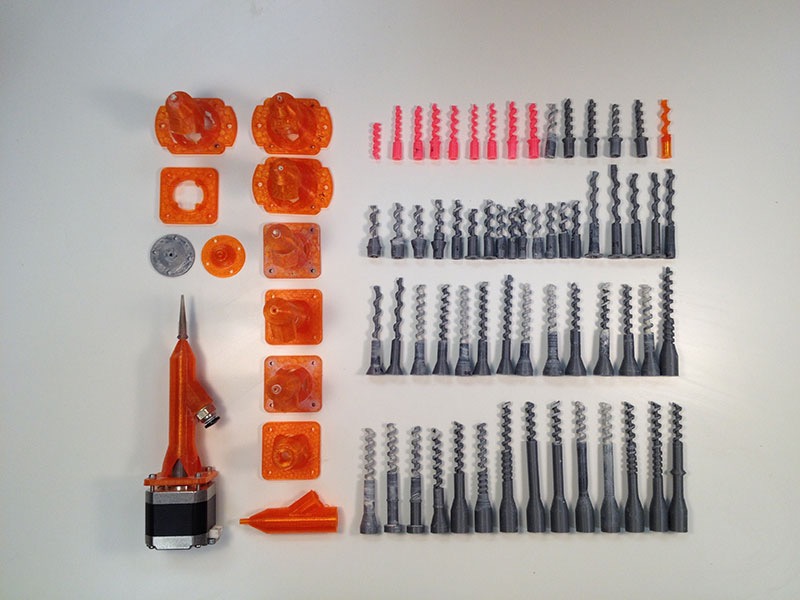 Why 3D Type and 3D Printing?

Through this process, Taekyeom’s clay prints have grown in complexity and intricacy. He research mainly focuses on creating new forms of three-dimensional typography, but he has also printed some beautiful ceramic sculptures using a wide variety of clay, including earthenware, stoneware, white clay, porcelain, and even copper clay.

“I am a graphic designer and a maker who loves 3D type and loves to work with clay. Many graphic design professionals and type designers have worked in the 2D space exclusively to create type. This practice has somewhat influenced the “glass box” that limits type creation in the high contrast between type and background. However, with 3D type, opposed to type printed onto paper, letters do not lie on the static space of a page. These letters thus acquire new characteristics such as texture, structure, volume, and even interactivity. As an artistic and typographic practice, 3D type is convergent as artistic expression, construction technique, and materiality. They each have a role to play to create letters in three-dimensional space. This new technology would provide good tools for unconventional typographic practice.” 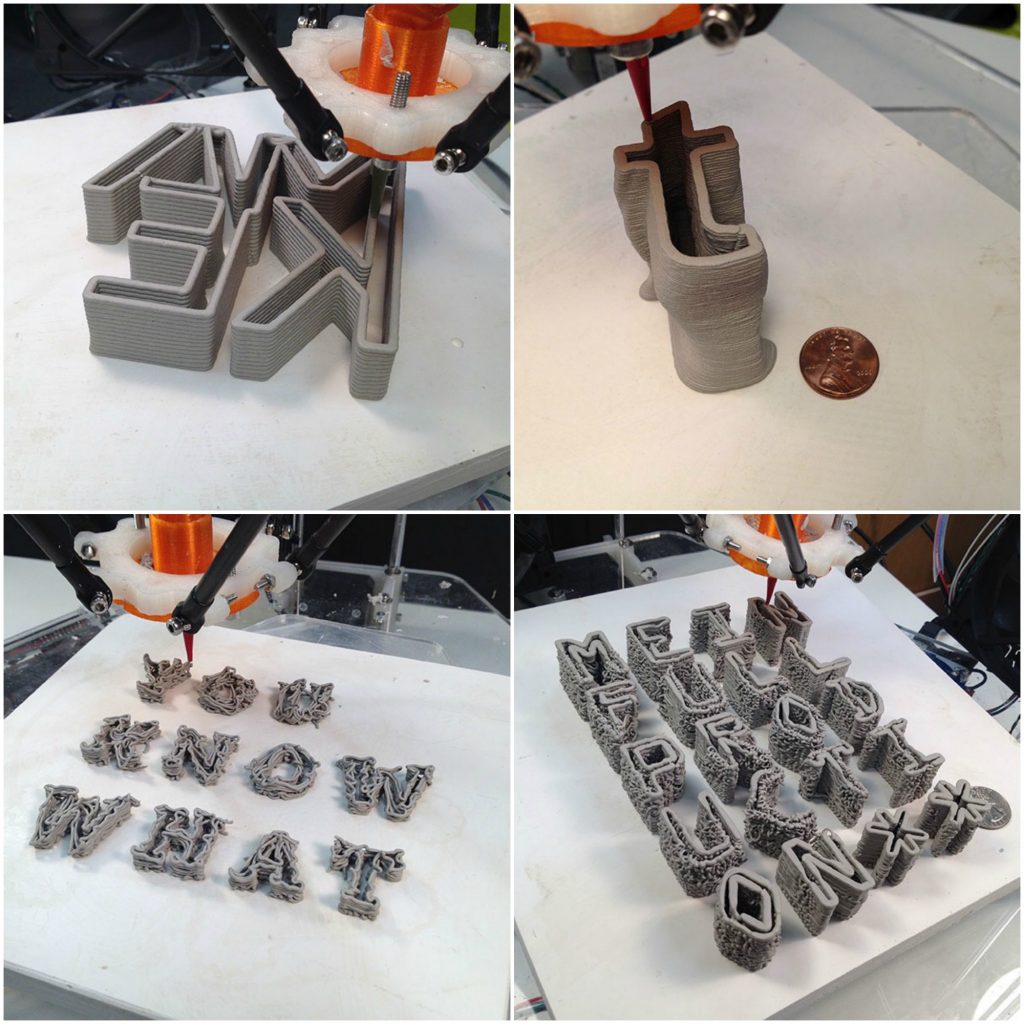 For now, Taekyeom is able to print small and medium scale 3D printed ceramic objects up to 300mm tall with a diameter of 300mm. His plan is to build a bigger printer and a larger clay extruder. With this new printer, he wants to print human-scale 3D typographic sculptures with clay and/or concrete. “I am an educator who likes to share what he has learned so far. For me that is the reason to become an educator. I am always looking for opportunities and venues to show my research. Please contact me if you are interested in a workshop, an artist talk and/or an exhibition,” he says. 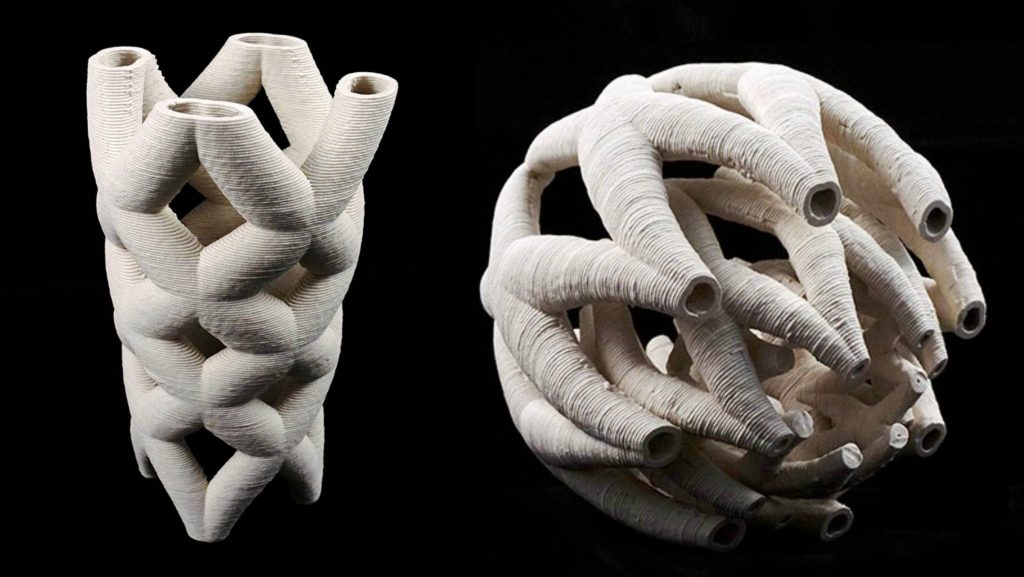 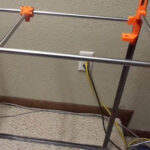 Building a 3D Printer from Scratch

Share:
WhatsApp Twitter Facebook LinkedIn Buffer Reddit E-mail
About the author | Taekyeom Lee
Taekyeom is currently an Assistant professor of Graphic Design at Appalachian State University in Boone, NC. He received an MFA degree in Graphic Design from the University of Illinois. His research explores new methods of creating 3D type and graphics through an interplay between design fundamentals and various techniques. For the latest research, he infused 3D printing into his research and has been experimenting with the new technology to create ceramic 3D type and objects.
Latest posts