3D Systems have just announced some developments showing that they are on track to provide a huge metal printing machine for the US military.

Back in 2019, 3D Systems were awarded a $15 million USD contract to develop a 1m x 1m x 600 mm metal printer with 9 lasers, making it very unique in terms of its size and sophistication. 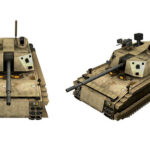 The system is being designed for the Combat Capabilities Development Command Army Research Laboratory (ARL) to enhance their capabilities for a variety of long-range munitions (missiles), combat vehicles and aerospace parts. The CCDC lab are big fans of 3D printing, as we noted in this article last week.

The new system, asides from having loads of lasers, has a unique feature in the form of its material deposition system. The military-grade printer will feature a selective powder deposition process. The key word here is selective. Most metal powder bed fusion technologies basically dump a load of powder onto the build area and a wiper comes across and smoothes it all down before melting/sintering the top layer into the required form. The problem with this method is that it generates a lot of unused material due to the indiscriminate deposition of the powder.

The new printer has made use of existing technologies from the 3D Systems bag of tricks, including an optical train evolved from their extant DMP platform. In addition, the new machine will feature a meltpool monitoring system to maintain consistency of the meltpool as it prints. Additionally, the printer features a heated build plate which reduces thermal stresses.

The new system from 3D Systems reduces the unused powder by only depositing the powder along the tool path, where it needs to be. This means less material usage, faster prints, less powder reuse (which is labour intensive) and ultimately reduced costs. And because material is not being recycled, it means the quality of the prints will remain constant as you would expect from using virgin powder. And if you do wish to reuse the powder, then you can do so knowing that the powder has taken on less oxygen thanks to its sophisticated and efficient vacuum system.

In order to keep the build area chemically pure, 3D Systems has employed their own vacuum chamber which pumps inert gas (argon) into the area, thus reducing oxidation (and risk of explosion) in reactive materials such as titanium and aluminium. The new printer will maintain oxygen levels below 25ppm in the build chamber, which is significantly better than most other metal printers which can only manage 500-1,000 ppm. Argon is not cheap either, and this vacuum system uses 10x less argon than other metal printers.

“The progress that has been made on this project to date is monumental. We look forward to the coming months as we progress to a full-scale production solution that will enable innovative new capabilities for transformational overmatch.”

Indeed, 3D Systems completed their first test print on the system just last month (October 2020), and seem to be progressing development at a steady rate. Naturally, the vast amount of experience and existing technology the company owns has helped to accelerate this from concept to first print in the space of a year.

“3D Systems was founded on a spirit of innovation, and our customers play a key role in catalyzing this process,” said Chuck Hull, co-founder and chief technology officer, 3D Systems.

“Our collaboration with ARL is allowing us to elevate our research and development efforts, achieving many industry firsts on our way to empowering the ARL to meet their goals. Our accomplishments through the first phases of this project will fuel the next, on our way to helping ARL scale their capabilities and bolstering their supply chain.”

And of course given the trend towards in-situ monitoring, no military-grade printer would be complete without some form of monitoring inside the machine, and this beast checks that box with the addition of 6 high contrast SLR cameras positioned above the print bed, allowing the observation of printing on the fly. All of this data from the cameras (and other sensors) is sent to the printer firmware where it is collated in an SQL database, which allows feedback and optimisation from the provided data to be readily accessible for whatever task the printer is performing, be it research-based task or even printing final parts.

There are no pictures of the new machine yet, but you can be sure that we will share them with you as soon as we get some!