Adam Savage, one of the creators and hosts of the beloved show Mythbusters, collaborated with his friend Richard Browning, founder of Gravity, to demonstrate a flying, bulletproof Iron Man suit that was 3D printed from Titanium. This is a feat that has to be seen to be believed.

The creation of the suit will be featured on a new show that Savage is doing with the Science Channel. It all started when Savage visited the Colorado School of Mines and one of the engineers told him they had Titanium 3D printers, adding “if you want to print something weird, let us know.” To which Savage replied, “Really? How about a full suit of Iron Man armor?” 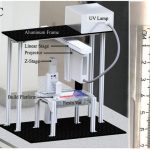 They partnered with EOS, a leader in metal and polymer powder bed fusion 3D printers. Using CAD files and images from Marvel Studios, they created a wearable version of the Mark II suit from the original Iron Man movie. To achieve flight via Gravity’s jet thrusters, the armor needed to be light, so each piece needed to be as thin as possible, which is easy to do with a 3D printer.

“If Tony Stark was not fictional and he was making an Iron Man suit right now, this is precisely how he would do it and this is the exact technology he’d be using,” stated Savage with excitement. He’s not wrong. Tony Stark would definitely use Titanium 3D printers to make his suits. In fact, 3D printers can be seen in the background of his workshop.

While the outside armor pieces were 3D printed in Titanium to make it bulletproof, other components were also printed in nylon and other flexible materials to make it wearable. Still, the suit is difficult to move around in. Savage wanted to fly in it, but for the safety of himself and everyone around him, he asked the expert of personal flight, Browning, to become Iron Man.

His Jet Suit is powered by five turbines that produce 1,050 horsepower, so it should be enough to carry Browning and the Iron Man suit. Sure enough, Browning lifts off, flies around for a moment, and deftly maneuvers into the warehouse where he lands on a platform. The realization of a functional Iron Man suit has been the dream of millions of comic book fans and engineers alike, so this is quite an achievement. Eventually, someone will go a step further and integrate the flight system into the armor suit and the difference between fact and fiction will cease to exist.