In a landmark experiment, Swedish researchers from Chalmers University of Technology have bioprinted stem cells that can grow biologically. The advent of this type of cell structure that can grow after printing has implications in the wider world of medical treatment. The researchers have also shown that the cells are capable of growing in much the same way normal tissue would. This means that the process effectively tricks biological structures into incorporating printed materials.

The researchers harvested the original cells from patients that underwent knee surgery. Then, the researchers processed these cells to revert them into a pluripotent state. As a result, the cells could develop into many other types of cellular forms. This, in turn, allowed the researchers to print them onto a structure using a nano-cellulose compound/ alginate bioink layer. 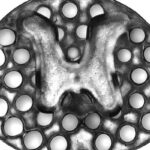 On top of this, the experiment also used a method for harvesting mediums from other cells. This was significant to the experiment because it served as a means for sending out signals that stem cells use to communicate with other mediums. In doing so, the researchers “tricked” the reals cells into adapting with the stem cells.

The research is a confirmation that stem cells can be printed into living tissue. It’s a step forward in this field of research and brings scientists closer to significant tests on real subjects. This type of research could open doors in the reparation of cartilage and eventually organs. Currently, the structure of the cellulose compound is not entirely suitable for the body and for this reason they are limited to lab tests and not real trials for the technology.

One of the researchers, Stina Simonsson, remarked: “before we begin to explore the possibility of incorporating the use of 3D bioprinted cartilage into the surgical treatment of patients, we need to find another material that can be broken down and absorbed by the body so that only the endogenous cartilage remains.”

We’ve previously covered alginate gels and bioinks in other articles. The entire study is available here, in case you might want to read further.